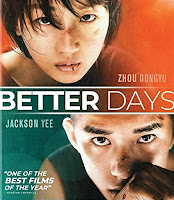 It was a big hit in China, but its theatrical release was mysteriously delayed by the increasingly censorious and censoring state film authorities. Outsiders were baffled what led the Party to also pull the film from international film festivals, but we might hazard a few guesses. For one thing, the punky Xiao Bei is keenly aware of the surveillance cameras posted throughout the city. Perhaps more fundamentally, the Chongqing police always side with the privileged, no matter how viciously their entitled teenagers bully the children of the less fortunate. The students of Hong Kong can definitely relate. However, one smart but socially disadvantaged girl finds an unlikely guardian angel in HK filmmaker Derek Tsang’s Chinese-production, Better Days, which releases today on BluRay.

China’s “gaokao” national university entrance exam is fast approaching, but one of Chen Nian’s classmates will not be sitting for it after all, because she just killed herself. It wasn’t the academic pressure. It was the bullying from Wei Lai and her clique. Unfortunately, Chen becomes their next target, after she covers the face of their dead classmate, to prevent even more social media posts.

Chen Nian is one of the smartest in the class, but she rarely sees her mother, who is constantly on the run, from creditors and unhappy customers for her dodgy, distribution-marketed cosmetics. She really has no support system, until Xiao takes it upon himself to protect her (after she tries to interrupt a group of thugs who jumped him). He initially intimidates Wei, but when she returns to her old ways, he escalates the violence—perhaps fatally. Or not. Just what happened on that fatal night is a secret screenwriters Lam Wing Sum, Li Yuan, & Xu Yimeng will tease out over the third act.

Better Days is in fact a film brimming with social conscience and moral outrage. None of its bite is softened by the ludicrous tacked-on epilogue, wherein lead actor Jackson Yee reads off a laundry list of recent government initiatives to fight bullying. That many programs proves the government really doesn’t care, because if Xi-Who-Must-Be-Obeyed Jinping really wanted to stop bullying, he would just tell his underlings to have it stopped.

Regardless, Zhou Dongyu is quite extraordinary as Chen Nian. It is a tough performance that is quiet, but deeply intense. She never makes cheap plays for viewer sympathy, but the totality of her character’s pain, alienation, and resentment is just crushing. Yee is also quite a brooding presence as Xiao Bei, but his “bad boy” turn is far more familiar and conventional. Zhou commands the film, but Yin Feng adds further layers of moral ambiguity as Zheng Yi, a formerly bullied police detective, who probably fails Chen Nian worse than anyone.

This is a scrupulously realistic film, but cinematographer Yu Jing-pin and composer Varqa Buehrer give it the look and texture of vintage 80s and 90s HK art cinema. It is also easy to understand why Xi’s apparatchiks would consider its brutal honesty to be bad for business. Very highly recommended, Better Days is out today (5/5) on BluRay.
Posted by J.B. at 3:00 AM