Raul Ruiz’s The Mysteries of Lisbon: The Full TV Miniseries 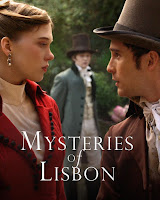 In polite late Portuguese Eighteenth Century society, everyone was either distantly related, ardent lovers, or sworn rivals—sometimes even two out of the three. Everyone who was anyone would have their own flashback—at least one for each of their previous identities. It is an epic tale of passion, scandal, and retreat into holy orders that might sound familiar. Eight years after the release of the four-and-a-half-hour theatrical feature, the full six-hour TV miniseries version of Raul Ruiz’s The Mysteries of Lisbon opens virtually this Friday in New York.

Although produced concurrently, the film and TV cuts were conceived by Ruiz to be very different and cohesive wholes. Both have scenes that are exclusive to themselves. Reportedly, Ruiz also altered his approach to the narrative. It has been a while since I originally reviewed the feature-cut, but as memory serves, characters had a way of making surprise returns that are more logically established in the TV series (yet, that was part of the film’s charm).

Nevertheless, there is still plenty of charm to the 6-hour-cut, which more fully explores the depths of the characters’ profoundly felt emotions (I think). Regardless, it is easy to get swept up again in their agonies and ecstasies (again), especially if it has been years since you have seen the other incarnation, or if you have never had the pleasure.

Ostensibly, Pedro da Silva is the hero of Mysteries of Lisbon and its over-riding meta-narrator. When we first meet him, he is a waifish orphan known simply as “Joao.” However, he will largely be over-shadowed by two mysterious men, who will directly shape his destiny. One is the virtuous Father Dinis, who serves as young Joao’s protector and will play a decisive role defending the honor of the mother he has yet to meet, Angela de Lima, the wife of the abusive Count of Santa Barbara. The other is Alberto de Magalhaes, a Brazilian merchant (pirate would probably be more accurate)—or at least that is what he calls himself now. It will be years before da Silva meets him face-to-face, but the rakish adventurer will forge an unlikely informal alliance with Father Dinis.

Admittedly, coincidence factors heavily in either version of Lisbon, but we should expect that from anything based on a big, fat 19th Century novel. Indeed, it is those crisscrossings of fate that make it so much fun to watch. Everything is connected and karma lives up to its reputation, in gloriously tragic fashion.

Both Lisbons also look like oil paintings that could have been produced by one of the era’s elite art academies. Ruiz’s careful visual compositions often offer shrewd perspectives on the social hierarchies of the times and the power dynamics within the narrative (servants overhear much). This is a richly detailed period production, but Ruiz executes with a postmodern sensibility. His motif using a proscenium arch stage diorama to literally frame some of the transitions is probably more prominent in the film, but it is still present in the series.

Adriano Luz’s portrayal of good Father Dinis remains the rock-solid, humanistic anchor of the full series. Arguably, Ricardo Pereira gains the most in stature and screen-time with his mercurial but charismatic performance as the roguish de Magalhaes (or whoever he is). Regardless, Maria Joao Bastos (the Portuguese actress well-known to Brazilian audiences for TV shows like The Clone and The Mechanism) remains an arrestingly sorrowful and dignified presence as da Silva’s long-suffering mother. Ironically, da Silva, at every stage of maturity, is still the least engaging figure of the series, as he was in the film.

Mysteries of Lisbon is a grand historical drama that boasts the elegance and craftmanship of a true master filmmaker. It combines old world refinement with new world attitudes, but in a manner that never conflicts. Very highly recommended, the even longer Mysteries of Lisbon series opens virtually in New York this Friday (5/22), with virtual engagements to follow in LA, Chicago, and Seattle, before its 7/2 VOD release.
Posted by J.B. at 3:00 AM