There is extensive Panamanian folklore regarding evil witches, or Bruja, but most of these characters we are about to meet would rather not hear about that right now. That is because they are running for their lives from a coven with supernatural powers. They have a vehicle, one of Panama’s few surviving festively decorated “Diablo Rojo” buses, but they lack fuel and a reliable sense of direction in Sol Moreno & J. Oskura Najera’s Diablo Rojo PTY, Panama’s first horror movie, which releases tomorrow on Amazon.

The witches are out to get Miguel Moreno, but he has no idea why. It starts with a drunken hook-up that takes a macabre turn, spooking the bus driver badly. Much to the confusion of his assistant, he floors the bus, refusing to heed the cops chasing behind him. Despite what seems like a few minutes on the road, Moreno and the patrolmen pursuing him find themselves miles away from the capitol, outside the country village Moreno grew up in.

They temporarily find refuge with the parish priest, who remembers Moreno and might have an idea about the bad karma catching up with him. Unfortunately, the destructive senior officer sabotages their sanctuary, forcing everyone back on the road.

Okay, DR PTY is not exactly up there with The Exorcist, but its unruly energy and gleeful gore are infectiously entertaining. It is a shame this film will not have more opportunities for first-run midnight screenings, because this film is probably best experienced with a theater full of whooping and hollering horror fans.

Regardless, you can’t keep a knuckleheaded underdog down. We can still appreciate the generously splattering practical effects and the half-serious attempt to draw from Panamanian folk culture and pop culture. As a bonus, the depiction of Padre Andres is mostly sympathetic. Granted, he thinks most of the sanctuary-seekers are idiots, but they mostly are. 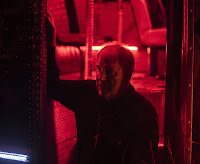 Carlos Carrasco manages to play it reasonably straight and earnest as Moreno, while Leo Wiznitzer is appealingly hard-nosed as the good Father. Julian Urriola clearly has a lot of fun playing Moreno’s stoner subordinate, but Renan Fernandez really deserves “good sport” credit for all he endures as the young, superstitious, and painfully ill-fated cop.

Yes, this is a messy meathead movie and it aims to please. It might not be great art, but it is a cinematic milestone. Indeed, the Panamanian horror movie tradition is off to a rip-roaring, body-part-ripping start. Connoisseurs can think of it like Alex de la Iglesia’s Witching & Bitching, with less brains and more chutzpah. Highly recommended for fans gross-out comedy horror, Diablo Rojo PTY releases tomorrow (5/14) on Amazon.
Posted by J.B. at 6:00 AM