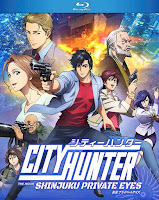 Shinjuku could be considered the Times Square of Tokyo. It is now a clean, neon-lit commercial mega-district, but it was once seedier and more dangerous. Ryo Saeba used to work cases as a “street-sweeping” private investigator for hire in old school Shinjuku, but he can still get into plenty of trouble in the fancy, high-rent neighborhood of today. The old manga and anime franchise that inspired Jackie Chan’s City Hunter returns with a new, sort of updated anime feature film, Kenji Kodama’s City Hunter: Shinjuku Privates Eyes, which releases today on BluRay.

Even though the world has changed, Saeba is the same Saeba. That means his impatient partner Kaori Makimura must continue to bonk him on the noggin with her comically large hammer whenever his outrageous horniness gets the better of him. That will definitely be an issue during this case, since they have been hired by fashion model Ai Shindou to protect her from the villains who killed her estranged father, a scientist conducting cutting-edge brain research.

Currently, Shindou is working on a shoot for one of the companies owned by industrialist Shinji Mikuni. As fate would have it, he is an old childhood friend of Makimura, who used to protect him from bullies. Sadly, he learned the wrong lesson from those experiences, because he is also obviously the criminal mastermind pulling the strings behind the scenes. It turns out his real business is arms dealing and the new weapons system Shindou’s father reluctantly developed for him is quite a doozy. To take him down, Saeba might need some help from cross-over characters from the Cat’s Eye franchise, set it the same universe.

City Hunter is such an established institution, it is easy to see why the studio would look to reboot it. The franchise even spawned a recent French live-action film, Nicky Larson and Cupid’s Perfume (as the dubbed character is known in France), with apparently little hand-wringing over the “white-washed” casting. However, for those unfamiliar with the characters, Saeba’s shticky horn-dog behavior clashes with the slick Miami Vice-inspired vibe and amped-up chases and shoot-outs.

Still, when Saeba and Umibouzu (a fellow sweeper, who also manages the Cat’s Eye coffee shop) get down to the business of fighting war-drones and battle-bots, it is definitely entertaining, in a meathead kind of way.  This is exactly the sort of run-and-gun action we watch series anime for in the first place. However, Saeba’s juvenile humor will even have twelve-year-old otakus rolling their eyes.

Shinjuku Private Eyes stands pretty well on its own for series newcomers, at least until the big Cat’s Eye crossover event late in the third act. It good to see the venerable series showing signs of life, but it might be time for Kodama and creator Tsukasa Hojo to figure out a way to mature Saeba a little, without alienating their bread-and-butter fans. Recommended for the anime action rather than the naughty slapstick comedy, City Hunter: Shinjuku Private Eyes releases today (5/26) on BluRay.
Posted by J.B. at 3:00 AM