Into the Dark: Delivered 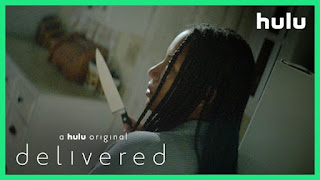 Remember the 1950s way to be pregnant? Basically, it involved regular calming treatments of bourbon and cigarettes, before the hospital finally dispensed a good dose of the hard stuff. There was no yoga back then. In retrospect, the old school approach would have been far safer for a mega-pregnant mother-to-be in Emma Tammi’s Delivered, the latest installment of Blumhouse’s Into the Dark, which premieres today on Hulu.

Valerie is pregnant and more or less okay with it. Her husband Tom is thrilled. He even goes to “Momma-ste” yoga with her. Unfortunately, that is where they meet Jenny Booth. Initially, the single-mother seems very hip and funny, so they happily accept her dinner invitation way out in the boonies. Of course, viewers know right from the start Booth is not exactly what she pretends to be, as Valerie discovers when she comes to. It turns out Booth isn’t even pregnant—that’s what she wants from Valerie.

The Into the Dark franchise has a hit-or-miss reputation that continues with Delivered. Frankly, Tammi’s direction is tight and disciplined, while her thesps are all quite earnest. The problem is the predictability of Dirk Blackman’s screenplay. For instance, as soon as we encounter Valerie’s desperate-to-talk ex-boyfriend Riley, we can pretty much guess his fate with a high degree of accuracy.

What really stands out this time around is the character of Booth and Tina Majorino’s portrayal of her. Although Kathy Bates’ Annie Wilkes will always cast a shadow over a film like this, Majorino plays her with more humor and attitude than we usually see in our psycho-captors. That also helps the film’s overall credibility, because it makes it more believable Valerie and Tom would accept her invitation.

Valerie and Tom are much more conventional characters, but Natalie Paul and Michael Cassidy develop some nice chemistry together (while they can). We definitely buy into them as a couple, which is also important.

The producers are probably hoping critics and audiences will find Valerie’s conflicted feelings about motherhood to be edgy and daring, but it seems rather like shop-worn material in the wake of films such as The Babadook, Hereditary, and Hole in the Ground. Delivered isn’t bad, but it isn’t sufficiently fresh or different to be notable. Mostly for compulsive horror viewers, who will want to check out Majorino’s work, Delivered starts streaming today (5/8) on Hulu, as part of Blumhouse’s Into the Dark.
Posted by J.B. at 6:00 AM