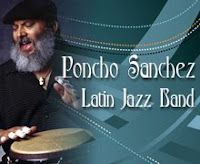 According to Latin Jazz legend Poncho Sanchez, Saturday night’s concert was the first time he could recall playing in Brooklyn. He would receive the Cultural Leadership Award from Brooklyn College’s Brooklyn Center for the Performing Arts (BCBC) at their 2010 Fiesta Caliente Gala shortly thereafter—a nice gig to make his borough debut.

“Just a little bit of soul,” Sanchez exhorted during the BCBC concert opener, a rendition of “One Mint Julep,” Ray Charles’s jazz instrumental hit. Indeed, Sanchez has always been a master of hot, rhythmic Latin Jazz with a funky kick, in the Willie Bobo tradition. For his latest CD, Psychedelic Blues, he even enlisted a guitarist deliberately recalling the special sound guitarist Sonny Terry brought to the Bobo band. Though Sanchez still tours with his regular working group (led by music director-pianist David Torres, sans guitar), the Psychedelic tunes are still well within their power zone, including the Bobo medley, “I Don’t Know/Fried Neck Bones and Some Home Fries/Spanish Grease,” which proved to be one of the biggest crowd pleasers last night.

With his silver beard and white taped fingers looking claw like from a distance, the burly, energetic Sanchez cut a bear-like figure from a distance Saturday night. Periodically, Sanchez also got out from behind his congas to front the band with his surprisingly smooth vocals, including the “I Don’t Know” portion of the Bobo tribute and the rollicking concert closer “Raise Your Hand,” courtesy of Stax Soul. He is still a dynamic conguero though, displaying the fleet hands that first brought him to prominence as a member of Cal Tjader’s band.

Sanchez’s regular working group (who can all be heard on Psychedelic) is a great mid-sized ensemble with a big sound. George Ortiz provided strong rhythmic accompaniment on the timbales and made the most of his high energy feature spot in “Do It.” Ron Blake might have been an audience favorite, taking several solos ranging well into the higher registers (though not quite Dizzy or Arturo Sandoval territory), yet maintaining an eloquent articulation. Javier Vergara doubled on multiple reeds, but displayed a particularly pleasing tone on alto, cutting through the roiling band yet still sounding warm and inviting.

Even in a concert hall setting, Sanchez and his musicians easily established a strong rapport with the audience, often joking with the rowdier patrons. In fact, bassist David Barda and trombonist-arranger Francisco Torres were probably just as vocal as Sanchez himself. Definitely, the Sanchez band has a real old school entertain-the-people work ethic. 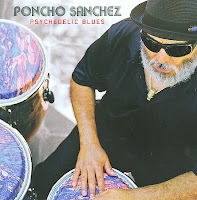 nchez kept the hall moving and grooving nicely. Some more assertive souls even started dancing in the aisles, even though the hall is not optimal for audience participation.

Still, BCBC is a seriously good deal to hear an artist of Sanchez’s caliber in a two-set concert, as opposed to one set in a Manhattan club at probably two to three times the cost. Upcoming BCBC jazz related shows include the big band music revue In the Mood, and performances by the Brooklyn College Big Band featuring Fred Ho’s Afro-Asian Ensemble and the United States Air Force Band of Liberty. A great live band, Poncho Sanchez in concert is definitely a recommended listening experience, as is Psychedelic Blues, now available from Concord Records, Sanchez’s labels for twenty four releases going back to 1982’s Sonando.
Posted by J.B. at 6:00 AM