He introduced the world to the dark side of fairy tale romance. Charles Perrault’s notorious French nobleman was married several times, but never achieved a “happily ever after” ending. Still, he is fabulously wealthy, so one young girl gives him another chance in Bluebeard (trailer here), Catherine Breillat’s take on the 1697 fairy tale, which opens this Friday in New York.

After the tragic death of their father, sisters Marie-Catharine and Anne are forced to leave their Catholic boarding school, returning to their middle class hovel with few prospects. However, the local lord is looking for a new wife, since he keeps misplacing the old ones. Everyone knows he is bad news, but he is also rich and powerful, so there is nothing to be done. Yet, he seems sad and sympathetic to Marie-Catherine, the younger, more impulsive sister, so she willingly consents. Of course, we know where this story goes, as do Catherine and Marie-Anne, two even younger sisters scarring themselves with the Bluebeard fairy tale in the film’s narrative framing device.

Though Breillat has a reputation as a feminist provocateur, it seems like the most overtly feminist aspect of her Bluebeard comes in her choice of source material. Yes, the lord is a manipulative, homicidal monster of a husband. He’s Bluebeard, after all. However, Breillat humanizes him to a surprising extent.

The contrast between the very young looking Lola Créton as Marie-Catherine and the hulking Dominique Thomas as the much older Bluebeard is deliberately creepy. Yet, far from a shrinking violet, the young wife initially appears to hold the upper hand, insisting on separate sleeping quarters until she reaches an appropriate age. In fact, the scenes of the courtship and their early days of marriage are played with surprising sensitivity. Indeed, these sequences really distinguish Breillat’s Bluebeard from the many prior film adaptations of the Perrault fairy tale. Still, we know where the film must be heading.

Or perhaps not. Breillat has a strange narrative boom to lower that would seem like a cheat if she had not so deftly established it in earlier scenes. While it might not make her Bluebeard a popular cro 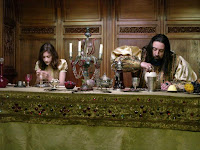 wd pleaser, it is masterfully effective filmmaking. If nothing else, it is definitely memorable.

Though the trappings of the grotesque nobleman are outwardly sumptuous, Breillat keeps the eerie fable atmosphere cold and dark. Unfortunately, the film’s initial scenes traffic in some tired stereotypes of predictably callous and intolerant Catholic nuns. Ultimately though, Breillat offers a fresh and intriguing reinterpretation of the Bluebeard legend, aided by its small but very strong cast. It opens this Friday (3/26) at the IFC Film Center.
Posted by J.B. at 6:30 AM