Fenyang in China’s northern Shanxi province is historically known for producing liquor and poets. This is a distinct source of pride for celebrated filmmaker and Fenyang native son Jia Zhangke. Shortly after winning the Venice Film Festival’s Golden Lion Award, the formerly underground director returned to many of the Fenyang locations seen in his early films during a homecoming documented by Damien Ounouri in Xiao Jia Going Home (trailer here), which opens China's Past, Present, Future on Film, the Asia Society’s two month series of contemporary independent cinema from China.

Most of Jia’s early films were shot on the streets of Fenyang and they were largely distributed there too, primarily as bootleg videos traded on the black market. As a result, Jia is warmly received both the local media and his old friends and neighbors, many of whom appeared in those early films. At one point, Jia explains what independent film really means in China. Not only does it imply a lack of financial support from major media institutions, it also involves a disregard for state censorship. Of course, this last point is easier said than done. At one point, we hear Jia formulating strategies to deal with the censorship office, now that he is essentially halfway inside the system and halfway out.

Jia also defines Chinese independent film as a cinema that reflects the realities of life for everyday people and addresses taboos in order to “probe the limits of freedom.” The former impulse is particularly pronounced in Jia’s work, as Ounouri amply illustrates with several clips from the director’s oeuvre.

Home, which echoes the title of Jia’s early short Xiao Shan Going Home, often juxtaposes scenes from his Shanxi films with contemporary footage of the director revisiting those sites from his past. While these seque 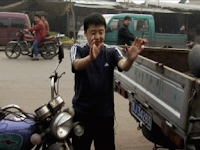 nces might have greater significance to those already familiar with the Chinese auteur’s films, they provide a good sense of his work and how it was shaped by his environment.

Perhaps fittingly, Jia, the ironic chronicler of the effects of globalization in China, has become the toast of the international film scene. In fact, the director will be in New York this weekend to launch the Asia Society series (which also features two films he produced) and for a retrospective of his own films at MoMA. As a clear and concise introduction to Jia’s themes and concerns, it is an appropriate film to kick-off both series. It plays at the Asia Society this Saturday (3/6) afternoon, with Jia in attendance for a post-screening Q&A, while the Society’s independent Chinese film series continues with weekly screenings through April 16th.
Posted by J.B. at 6:30 AM