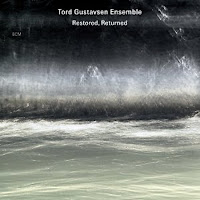 Great poetry has a funny way of yielding up secrets to readers at the strangest time. A volume of W.H. Auden’s poetry seemed to call to the Norwegian jazz pianist Tord Gustavsen while he was touring Oxford. Something about the verse spoke to Gustavsen, ultimately inspiring Restored, Returned, his latest CD which departs from the trio format the pianist has hitherto excelled in.

When Tord Gustavsen’s debut ECM recording was released in America, it was about as unlikely a sensation as you could imagine, yet it became a surprise breakout hit of the year. Introspective rather than showy (sublimely so, in fact), it followed honorably in the Bill Evans trio tradition. However, his new ensemble will surely surprise his listeners, incorporating reeds, vocals, and even a different bassist (Mats Eilertsen in place of Harald Johnsen).

Still, there is a tranquility to Restored that is well in keeping with Gustavsen’s previous releases. The new group’s sensitive approach is immediately evident in the opening “The Child Within,” a lovely lullaby that perfectly suits Tore Brunborg forlorn sound on the soprano saxophone. It is effectively followed by the minimalist introduction to “Way In,” which slowly builds into a relatively stormy crescendo, before subsiding again.

The first of Gustavsen’s four settings of Auden’s poetry, “Lay Your Sleeping Head, My Love” has a surprisingly bluesy vibe, largely due to Kristin Asbjørnsen’s “rootsy” vocal style, which bears favorable comparison to Norah Jones. The slight rasp of her voice also brings a lot of character to the slow building title track, nicely contrasting with Brunborg’s crisp tenor.

Indeed, Brunborg has strong straight ahead chops, which he gets to exercise on tenor with the appropriately snaky but still peaceful “Spiral Song,” probably the “pure” jazz highlight of Restored propelled with subtle insistence by drummer (and trio regular) Jarle Vespestad.

Gustavsen’s compositions are consistently intriguing, evolving slyly at odd angles, often ending someplace completely unexpected, as in “The Swirl/Wrapped in a Yielding Air,” a piece built on a slow groove that segues into a sparse, nearly straight spoken word passage from Asbjørnsen that actually is not a particularly supportive arrangement for her distinctive voice. Much more compatible are t

he various “Lullaby” tracks that feature her haunting wordless vocalizing.

The selected Auden stanzas have a fatalistic romanticism that perfectly suits the darkly evocative elegance of Gustavsen’s music. Like fine poetry it takes on deeper meanings over time with repeated listening. Truly eloquent music, Restored represents a refreshing departure from an already important jazz talent. New Yorkers also have an opportunity to hear the Gustavsen ensemble in live performance tonight (3/31) at Merkin Hall.