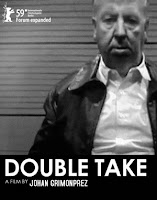 The name was Hitchcock, Alfred Hitchcock. He truly was an international man of mystery, but usually from behind the camera. However, Hitchcock becomes the unlikely Zelig-esque protagonist of Johan Grimonprez’s Cold War essay, Double Take, which closed this year’s Documentary Fortnight at the MoMA.

More an exercise in collage than documentary film-making, Double Take intersperses clips of Hitchcock’s self-parodying appearances from the Alfred Hitchcock Presents television series amongst archival Cold War footage and recent interviews with noted Hitchcock impersonator Ron Burrage. While there is an ostensible storyline involving Hitchcock’s encounter with his doppelganger, the film is more concerned with scoring revisionist points against easy targets from American Cold War history, like Richard Nixon.

In his interview segments, Burrage seems like a lovely gentleman, who has strange but happy connections to Hitchcock through various twists of fate. Indeed, his scenes are the film’s best moments. However, the troubles with Double are manifest.

Throughout the film, there are no attempts to provide any background or context that might lead to a deeper understanding of the Cold War. Rather, the film is consciously anti-context, trafficking in the most stilted sound bites Grimonprez could selectively edit. For instance, there is never any mention of Soviet gulags or the mass executions ordered Castro (and his Robespierre, Che) during his consolidation of power. Instead, we simply hear Khrushchev tell Nixon that Americans do not understand Communism and watch as Castro accepts the Kremlin’s offer of friendship after the apparently inexplicable Bay of Pigs invasion attempt.

Viewing Double is a depressing experience, because it does not want to inform or educate. Instead, it is a conscious effort to reduce a critically important historical conflict to simplistic slogans. Mercifully, we are at least spared a “duck and cover” sequence, but the frequent inclusion vintage Folger’s Coffee commercials to remind us yet again of America’s consumerist culture are truly tiresome clichés.

The kind of editorial discretion on display in Double ultimately cheapens the level of political discourse. This is particularly true of the film’s closing shot at Secretary Rumsfeld. Anyone who has served in public life as long as he has can have a snippet of remarks excerpted to make them look foolish. It is no fairer to use such cherry-picked quotes to condemn a public figure and their policies, than it is to dismiss Cary Grant’s dramatic talent because James Mason’s character calls him a “bad actor” in a clip from North by Northwest also seen in Double.

In one respect, Double borders on the outright offensive. There is a recurring motif a body falling from a building that will almost certainly recall memories of 9-11 for most Americans. While Grimonprez is a Belgian filmmaker and might not be expected to be as familiar with the news coverage of that event, he himself referenced images of 9-11 during the post-screening Q&A. For most people, that footage represents the tragic

deaths of real people. To “sample” and “remix” that imagery is not merely callous, it is soulless to a degree approaching the vampiric.

Double was a surprisingly disappointing conclusion to what had been a very strong slate of films at Documentary Fortnight, most notably including The Miscreants of Taliwood and Vlast (Power). Problematic on multiple levels, it is a cynical film that ultimately attempts to suppress critical thinking rather than foster an understanding of recent political history.
Posted by J.B. at 7:00 AM