It can be an ego-crushing way to make a lot of money. Unlike television, where writers often wield a great deal of influence, screenwriters are pretty much at the bottom of the food chain in the movie business. Yes, some scripts are sold for major green, but those are hardly the norm. Indeed, some of the most successful screenwriters in the business have stories of rejection and professional angst to share in Peter Hanson’s Tales from the Script (trailer here), which opens Friday in New York.

Every cliché about screenwriting is true. Screenwriters print their words on the page and then the project is completely out of their hands. Decent scripts get sabotaged every day through the rewriting process. Conversely, many writers performing emergency re-writes do not get proper credit for saving problematic scripts.

Tied-into Hanson’s book of the same title co-edited with his co-producer Paul Robert Herman, Script draws from a wide talent pool of screenwriters. Probably, the best known interview subjects are William Goldman (whose credits include All the President’s Men, Butch Cassidy and the Sundance Kid, and The Princess Bride, based on his own novel) and Paul Schrader (who penned classics like Taxi Driver and Raging Bull). Arguably, the elder statesman of the film is the late Mel Shavelson, the writer-director of Cast a Giant Shadow, the classic drama of the founding of the State of Israel. However, the best war story probably comes from Guinevere Turner from her experience writing the first draft of BloodRayne for Uwe Boll, which will not surprise anyone familiar with Boll and the train-wrecks he calls films.

Filmed in a straight-forward talking head interview format (with some cheesy infomercial music in the background), Script is hardly breaks any new cinematic ground. That hardly matters though, because so many of the stories are truly memorable. Some are funny, like Turner’s experience on Boll’s notorious bomb, whereas Bruce Joel Rubin experience with his film My Life is actually kind 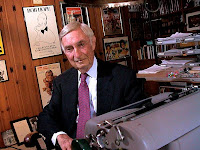 of touching. While many of the interviews emphasize the time and effort a serious screenwriting career requires, most are refreshingly self-aware enough to also concede it is a far easier way to earn a living than digging ditches, or other such real work.

Most Script’s participating screenwriters are eloquent enough to convince audiences that when a movie blows, it is probably not the writer’s fault. It is a likable valentine to writers and the writing process, but not necessarily to Hollywood. While it might be stylistically conventional, Script has a nice heart. It opens Friday (3/12) in New York at the Quad Cinema.
Posted by J.B. at 3:00 AM