In Matteo Garrone’s Gommorah, co-writers Gianni Di Gregorio and Garrone dramatized the reign of terror of the Camorra, Italy’s clannish criminal organization considered more ruthless than the Mafia. In their new collaboration, they bring us four hungry old ladies who expect to be waited on hand-and-foot. I’d rather tangle with the Camorra. Unfortunately, the down-on-his-luck Gianni is stuck with his 93-year old mother and three elderly guests in Mid-August Lunch (trailer here), Di Gregorio’s directorial debut produced by Garrone, which opens in New York on Wednesday.

Writer-director Di Gregorio also stars as his debt-ridden namesake, who happily still has credit at his local wine emporium. He might not have a lot of prospects, but at least he enjoys good food and drink. Most of his days are spent quietly caring for his mother, who might be difficult but appreciates his cooking. In arrears to Luigi, the landlord, he agrees to take care of his mother during Pranzo di Ferragosto, Italy’s summer holiday weekend.

Much to Gianni’s surprise, Luigi shows up with an extra old lady, his aunt. When the family doctor also asks a similar favor, Gianni finds himself looking after his mother as well. Hit on and put upon by the strange old ladies, Gianni suddenly has to whip up a traditional Ferragosto lunch for four demanding palettes.

While Lunch steadily builds to its titular meal, it really is not a food movie in the Babette’s Feast and Eat Drink Man Woman tradition, because it never truly luxuriates in the scenes of food preparation and presentation. Gianni just puts it on the table and they eat it. Still, even though Lunch is set during the off season, scenes of Gianni and his drinking buddy Viking scootering in and around Rome, nicely 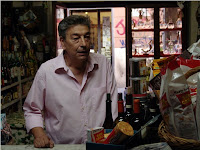 While there is not much dramatic heavy lifting for any of Lunch’s cast, Di Gregorio is an appealing protagonist to spend time with. Bearing a certain resemblance to Jerry Orbach, his face is appropriately lined with character. He is a convincing nice guy, who makes the brief Lunch a pleasant if slight cinematic experience.

If spending time with four gabby old ladies is your idea of the good life, Lunch is the film for you. Ultimately, it is more of a light snack than a rich feast, but it has its discrete charms. It opens this Wednesday (3/17) at Film Forum.
Posted by J.B. at 6:30 AM