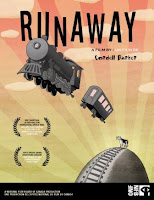 Of the surviving five Oscar nominees for the best animated short, the best is also the most commercially prominent, Wallace and Gromit: A Matter of Loaf and Death, which had its U.S. premiere at last year’s New York International Children’s Film Festival. However, the two best films on the original shortlist did not make the cut. Sadly, this includes Cordell Barker’s Runaway (trailer here). Again showing superior programming taste, this year’s NYICFF includes the sly Runaway in one of its several blocks of short films.

The Canadian Barker’s animation might look light-hearted and whimsical, but at its core, Runaway is a gleefully subversive gem of a film. Nine minutes of madcap humor, Runaway involves a cow, an out of control train, a little fur ball of a dog, and an engineer’s assistant trying desperately to save the day.

It all hurtles down the track to the propulsive rhythm of Benoit Charest’s soundtrack. Best known for the score of Silvain Chomet’s The Triplets of Belleville, Charest’s music for Runaway has a similar spirit, sounding something like a mutated form of early hot jazz on some serious acid. Charest also brought in many of the same jazz musicians who recorded Triplets, including the drummer Jim Doxas and his saxophonist brother Chet, both of whom have played with the highly regarded Canadian jazz pianist Oliver Jones.

Runaway is an inspired act of lunacy, rendered in sophisticated style. It screens the next three successive Saturdays (3/6, 3/13, and 3/20) as part of “Short Films One.” NYICFF seems to have a knack for selec

ted interesting shorts, with Runaway certainly being a case in point.

Other short film highlights include the Oscar nominated French Roast, whose homeless-man-teaches-uptight-businessman-a-lesson-in-living storyline is more than a little trite, but at least it also boasts a pleasing soundtrack, composed by Olivier Llioutry and featuring the flute of jazz musician Bobby Rangell. Jake Armstrong’s Terrible Thing from Alpha 9 is quite notable as well for probably the most macabre closing titles you are likely to see at a children’s film festival anytime soon. Now underway, the NYICFF will screen several short programming blocks throughout the festival, which continues through March 21st.
Posted by J.B. at 8:30 AM