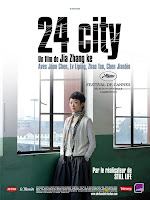 A funny thing happened on the way to the Workers’ Paradise in Chengdu. The state factory turned into a luxury condo. It was known as Factory 420, but it will soon be 24 City, a high-rise hotel and apartment complex, which takes its name from a classic poem that extolled the city’s beauty. A traditional staple of Communist propaganda, the factory story gets a subversive twist in Jia Zhangke’s 24 City (trailer here), which screens during MoMA’s upcoming Jia retrospective.

Some proud veterans of Factory 420 refer to it as a place where they fought “American Imperialism.” They produced munitions and airplane parts for China’s Communist allies during both the Korean War and Viet Nam, but recent years were not kind to the state enterprise. After several rounds of layoffs, management has decided to pull up stakes, selling the Chengdu factory to a real estate developer.

Many former workers tell their stories in 24 City, but Jia throws the audience frequent curve balls, mixing in fictionalized interviews filmed with professional actors, several of whom would be quite recognizable to Chinese audiences. For Americans, there will be at least one familiar face: Joan Chen, well-known for her work in The Last Emperor and David Lynch’s Twin Peaks. In a bit of self-referential casting, Chen plays a woman supposedly nicknamed after the title character of the film Little Flower, because of her resemblance to its young star—Joan Chen.

In both the real voices of Factory 420 and Jia’s fictional characters, we hear tangential references to the dramatic upheavals of Communist-era Chinese history. The Cultural Revolution is mentioned in passing. A relative’s homecoming from the countryside is remembered, but not elaborated on. Although nobody states it directly, many former workers of 420 clearly seem to be wondering why they went through all that chaos, just to get to this point.

Jia, the skillful cinematic gamesman, matches the look and tone of his scripted sequences to that of his legitimate interview footage quite well. Generally though, the more attractive the talking head, the more likely it is to be a professional ringer. Joan Chen in particular is still a strikingly luminous screen-presence. Post-modern playfulness aside, her segment is a touching dramatization of alienation in contemporary Chinese society.

24 City fittingly concludes with its other standout dramatic performance, which encapsulates all of the cultural and generational divides at play in Chengdu. Jia regular Zhao Tao plays Su Na, the grown daughter of factory workers who makes her living as a personal shopper for the nouveau riche. Though her relations with her parents were long strained, a chance visit to her mother’s workplace open

ed her eyes to the difficulties they endured. In gratitude for their labor, she resolves to make her fortune so she can buy them an apartment in that future capitalist Mecca: 24 City.

Although Jia’s pacing can tend a bit toward the languid, he effectively captures China’s mood of uncertainty. His use of nostalgic music and film clips evokes a sense of a past which failed to live up to its promises. 24 City is a subtle, intriguing film freely mixing fact and fiction to represent its own subjective truth. It screens at MoMa this Saturday (3/6), with the director in attendance, as well as next Friday (3/12).
Posted by J.B. at 5:30 AM