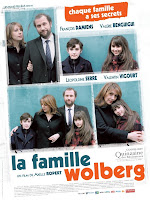 The Wolbergs love their vintage American soul music. How they feel about each other is far more complicated, as it always is in families. While their particular circumstances might be unique, they still face universal challenges in Axelle Ropert’s The Wolberg Family (trailer here), which screens during this year’s Rendezvous with French Cinema.

Simon Wolberg, the shaggy headed soul music enthusiast, might sound like an unlikely mayor for his provincial French town, but he seems born for the job. Relating to his family is more difficult. Actually, his feelings are not complicated at all. He worships his wife Marianne and is utterly devoted to his son and daughter. He does not have much use for his brother-in-law though, contemptuously labeling him a “bohemian.” Unfortunately, his family has a host of issues with him, but they might not have as much time to work them out as they think.

Perfectly accentuating the drama with classic soul and R&B, Ropert has created a family style Big Chill, cutting out all the annoying parts. Up until the pretentious closing scene (which is just so quintessentially French), there is not a false scene in the film. At first, Ropert digs beneath the Wolbergs’ apparently happy facades to expose their not-so hidden resentments. Then he digs further to reveal their fundamental love.

François Damiens is truly unforgettable as the tragically “Type A” Simon Wolberg. Your heart bleeds for the man even when you wince at his blundering insensitivity. Hey, he’s just like family. By contrast, Valérie Benguigui’s Marianne is smart and tightly controlled—the model of a politician’s wife, yet far more sensitive and complex than we might initially suspect.

Ropert could easily have reduced the Wolberg’s to stereotypes, but instead his approach is gracefully humanistic. Lense

d with tremendous sensitivity by Celine Bozon, Wolberg has an intimate feel, but Ropert never lets the pacing lag.

Despite the funky brass of its soundtrack, Wolberg is a film of quiet moments, closely observed. It is a beautiful treasure of a film, heartily recommended at French Rendezvous, especially since it has yet to acquire an American distributor. It screens at the IFC Film Center this Saturday (3/13) and at the Walter Reade Theater March 20th and 21st.
Posted by J.B. at 9:15 AM