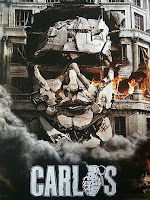 Ilich Ramírez Sánchez killed on behalf of just about every violent extremist movement of the twentieth century. Sheltered by the East German Stasi, he was most closely aligned with the Popular Front for the Liberation of Palestine (PFLP). An ardent Marxist and notorious terrorist, Ramírez Sánchez is best known as the infamous “Carlos the Jackal” (though he preferred just plain “Carlos”). French director Olivier Assayas dramatizes his infamous crimes (and there are a lot of them) in his grandly ambitious five-hour, thinly fictionalized historical thriller Carlos (trailer here), which screens in its entirety during this year’s New York Film Festival.

Soviet educated, the Venezuelan Ramírez Sánchez views the world through a radicalized prism. He is convinced “direct action” (meaning terrorism) is necessary to bring about supposedly progressive change. A promising volunteer for the PFLP terrorist network, Carlos steadily establishes a reputation for ruthlessness with a number of grenade attacks on cafes and the unsuccessful assassination attempt of Edward Sieff, president of Marks & Spencer and a prominent member of the British Jewish community.

Carlos forged alliances with the Japanese Red Army and extremist German Baader Meinhof/RAF splinter groups, acting more or less in concert. While he was not directly involved in the murder of the Israeli athletes at the 1972 Munich Olympics or the hijacking of Air France Flight 139 freed by IDF’s famous Entebbe operation, he was personally charged with subsequent reprisal attacks. However, his greatest international infamy probably arose from his attack on the 1975 OPEC meeting, taking the cartel’s delegates hostage.

Ramírez Sánchez is an anti-Semitic mass murderer. His crimes have no justification. Wisely, Assayas does not really go down that road. While his Carlos has a certain animal magnetism and a voracious sexual appetite, the film never makes a martyr of him, unlike the terrorist agit-prop of Uli Edel’s Baader Meinhof Complex. Essentially, Assayas shows Ramírez Sánchez going about his destructive business rather matter-of-factly, only occasionally paying lip service to some leftist cause, such as Allende in Chile. Yet, there are a handful of truly telling scenes, as when a former RAF accomplice remarks to Carlos how sick it is for Germans like himself to be killing Jews.

The five plus hours of Carlos are packed to the gills with violent intrigue. Yet, it is all pretty well grounded in historical fact. Indeed, it is quite in synch with the facts established in Barbet Schroeder’s Terror’s Advocate, a documentary profile of Jacques Vergés, the attorney for Ramírez Sánchez, the PFLP, and just about every other terrorist of the twentieth century (who also briefly appears as a character in Carlos). Frankly, it would make a much better double feature with Assayas’s film than Edel’s love-letter to terror.

Edgar Ramírez is appropriately both charismatic and creepy as Ramírez Sánchez, nicely capturing the ferocity of extremism. There are also scores of effective supporting performances from its large but completely credible ensemble cast. Yet, Carlos is much more a director’s film than an actor’s,

Originally broadcast on French television, Carlos might be divided into three parts, but it truly is one unified film, entirely helmed by Assayas (unlike the three interlocking films of Red Riding). Truthfully, 319 minutes are a long haul. As fascinating and absorbing as it is, most viewers will be desperately hoping for his capture by the final half hour. For those with short attention spans, a two and half hour cut will eventually screen at the Lincoln Plaza. However, if you are going to see a big epic film like Carlos, you should do it right and get the entire experience. The full unvarnished and uncut Carlos screens this Saturday morning (10/2) during the 2010 NYFF.
Posted by J.B. at 9:00 AM