Ahead of Time: Ruth Gruber’s Life of Scoops

One NYU professor’s enthusiasm for German culture in the 1930’s indirectly contributed to creation of the State of Israel. The link between them was Ruth Gruber, a young Jewish student of German culture who became a foreign correspondent, whose reportage is thought to have materially marshaled support for UN Resolution 181 recommending the partition of the British Mandate. Her life and scoops are profiled in Bob Richman’s documentary Ahead of Time (trailer here), which opens Friday in New York.

A very precocious, very Brooklyn fifteen year-old teenager enrolled in NYU, Gruber’s crush on her German instructor led her to pursue her studies in Germany, during the early 1930’s of all times. When she returned, she was the youngest Ph.D. of the day and had sat in a front row seat for one of Hitler’s public rallies. She became a journalist, interviewing Virginia Woolf, touring the Soviet Arctic, and most providentially, reporting on the Exodus 1947, the ship loaded with Jewish refugees fired upon by the British before it could reach the Mandate. Thanks to her scoop, outrage over the shooting and subsequent British conduct swung world opinion in favor of the State of Israel.

Gruber led an undeniably eventful life, but she is not necessarily well served by her documentarian-biographer Richman, who seems determined to present her time in the Soviet Arctic and the pointed Congressional questions she later fielded during her stint with the Interior Department through a staunchly anti-McCarthyist prism. Yet, he ignores the Gruber’s forthright reporting on the Soviet Gulags that should refute suspicions she turned a blind eye to the crimes of the Soviet state, perhaps fearing it would justify the very real Cold War concerns of the time. Frankly, this slights both Gruber and history, creating a much more benign impression of the Soviet empire than is historically accurate.

By contrast, Ahead is far more on target when explaining the pivotal role Gruber played as an advocate for Jewish refugees. In an official capacity with the Interior, she took a group of 1,000 asylum seekers under her wing in upstate New York. Of course, as a journalist, she publicized the plight of those on the Exodus 1947, which had an even greater impact on world history. Indeed, her recent exchanges with Ike Arnonowitz, the Captain of the ill-fated ship (then only i 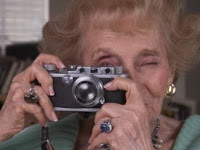 n his early twenties), is an especially telling highlight of the film.

Gruber’s life is truly fascinating, impervious to a flawed biographer. One hopes that the eventual DVD extras will add some important context left out of Ahead. Still, it certainly has value for its insiders’ accounts of the Exodus 1947 affair. A doc that leaves you wanting more, Ahead opens this Friday (9/10) in New York at the Angelika Film Center.
Posted by J.B. at 1:15 PM