Much like Katrina’s destructive wake, the tragic Louisville flood of 1937 so devastated the city, many questioned the wisdom of rebuilding. To make matters worth, Louisville faced its most pressing existential crisis in the midst of the Great Depression. However, as in New Orleans today (let us hope), music played an important role revitalizing the city. How the Louisville Orchestra became both a source of civic pride and the nation’s unrivaled performance home for groundbreaking contemporary classical music is a fascinating episode of American cultural history revealed in co-directors Owsley Brown III and Jerome Hiler’s documentary Music Makes a City (trailer here), which opens this Friday in New York.

It is a depressing fact of life that scores of supposedly educated adults will be unfamiliar with the towering figures of classical music whose compositions were first performed and recorded by the Louisville Orchestra. This includes such luminaries as Paul Hindemith, Heitor Villa-Lobos, Darius Milhaud, Virgil Thomson, Gunther Schuller, Ned Rorem, and Elliott Carter. For those in the know, the prospect of performing world premieres from such august company is an absolute jaw-dropper. Ironically, while many Americans simply associated Kentucky with the Derby, for music lovers listening behind the Iron Curtain on the Radio Free Europe, it was the world capitol for New Music.

Of course, the Orchestra started quite modestly, founded by local city father Dan C. Byck, hoping to renew the Louisville’s battered spirits. His efforts found an important booster in newly elected Mayor Charles Farnsley. A good old boy on the campaign trail, Farnsley was a relentless self-improver, reportedly adopting Confucian philosophy to some extent. However, a class he attended on contemporary classical music would drastically alter the Orchestra’s destiny. With his encouragement the Orchestra instituted a program of special commissions to be world premiered in Louisville, often with the composer conducting.

It worked—sort of. The commission program created tangible buzz, but the orchestra remained in the red. However, when the Rockefeller Foundation awarded their first grant to an arts organization to the then staggering tune of $400,000, the Orchestra was able to embark on a truly ambitious program of forty-six world premieres over the next three years.

The Louisville Orchestra’s story should serve as an inspirational case study for everyone trying to make a go of it in performing arts management. Thanks to the leadership of conductor Robert Whitney and the behind-the-scenes encouragement of Farnsley, the Louisville Orchestra carved out an under-served but prestigious niche, making musical history in the process.

While the commissioned music was often challenging, Brown and Hiler’s approach is gentle and respectful. They also scored some genuinely prestigious interviews, including commission series composers like Chou Wen-chung, Schuller, and the recent centenarian Elliot (who was freakishly productive in his ninth decade, publishing forty original compositions). The co-directors also shrewdly chose the music to showcase during the film. Frankly, it is no accident frequently atonal contemporary classical music is often perceived as forbidding and even pretentious. Yet, a piece like Gian Francesco Malipiero’s Concerto No. 3 for Piano and Orchestra has a simple and direct beauty that should a 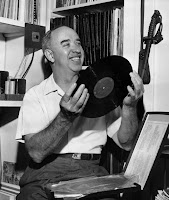 ppeal to a wider classical audience. (However, their periodic musical interludes featuring peaceful nature scenes, though well intentioned, have a bit of an unfortunate “Deep Thoughts with Jack Handy” vibe.)

Though City will initially sound like a rather parochial documentary, it should ultimately convince just about every viewer the body of work produced by Whitney and the Louisville Orchestra easily dwarfs that of all their contemporaries, even including Leonard Bernstein at the New York Philharmonic. Intelligently representing both the woefully underappreciated classical music of the contemporary era and the unexpectedly cosmopolitan city of Louisville (at least for most New Yorkers), City is highly recommended for adventurous music lovers. It opens this Friday (9/17) in New York at the Quad Cinemas.
Posted by J.B. at 3:15 AM