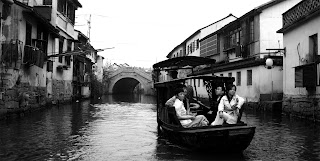 Some short films are relatively long and complex, compared to others that are mere comedic sketches. However, some shorts can feel longer than they really are, especially for those unaccustomed to experimental filmmaking. Such might be the case for some patrons sampling the short film program screening this week as part of MoMA’s ongoing ContemporAsian series.

Almost perversely, MoMA has programmed this short film program in increasing order of accessibility, starting with the most demanding selection, Apichatpong Weerasethakul’s narrative-free Letter to Uncle Boonmee. For hardcore cineastes, this might be the biggest draw, serving as an impressionistic prelude to his Palme d’Or winning narrative feature Uncle Boonmee Who Can Recall Past Lives, which screens at the upcoming New York Film Festival. Consisting of long artful tracking shots of Weerasethakul’s provincial quarters, it might baffle more literal minded audiences. After all, the house is not Boonmee’s. It does not even look similar, according to Weerasethakul’s voice-over, but it is still a house in a hardscrabble “peasant” community, so it evidently brings the filmmaker’s uncle to mind.

At least, Tsai Ming-liang’s Madam Butterfly has an identifiable narrative structure, but the great Taiwanese auteur’s deliberate pacing and intimate close-ups may tire viewers acclimated to Michael Bay-style filmmaking. A radical recasting of the Puccini story, we watch as a woman deals with the abandonment of her lover in a Kuala Lumpur bus station. However, for those with grown-up sensibilities, Pearlly Chua’s largely improvised performance is quite affecting.

It is quite a statement to say Jia Zhangke’s contribution has one of the stronger narrative drives of the program, but there it is. His eloquent Cry Me a River is sort of a fifteen minute crystallization of The Big Chill, without the now clichéd reliance on classic rock to set the mood. Four former classmates have returned to Suzhou to celebrate their former professor’s birthday, but they are really there to reconnect with old flames.

Though inspired by Fei Mu’s Spring in a Small Town, even viewers familiar with the pre-PRC classic (banned after 1949 for being insufficiently political) might not automatically recognize it as such. However, both involve former lovers coming together after a long separation to come to terms with their regrets. It is one of his more elegant films, again distinguished by a moving performance by his frequent muse, the lovely Zhao Tao.

Unfortunately, many of those who walked out during the first two films Friday night would probably have enjoyed Hong Sang-soo’s Lost in the Mountains had they stayed. Like River, Lost also involves former students visiting their ex-professor, but Misook was amorously involved with the married man. Returning on a spur of the moment visit, she is appalled to discover her best friend Jin-young has taken up with the old lecher. Not thinking clearly, she proceeds to drag another former lover in to the awkward reunion.

Often very witty in a truthful, cutting way, Lost is a film general audiences can easily relate to. In addition to being cute, Yumi Jung is convincingly over-wrought but also quite funny as Misook. I

ndeed, it is a fine comedic-dramatic ensemble piece, nicely turned by its four principals.

All four directors are important filmmakers and each selection is a noteworthy film. However, the program order should have been reversed. While Lost is a thoroughly satisfying film and River has a strange quiet power of its own, Letter is a tough sell to all except true film fest diehards. Well worth checking out and sticking with, the ContemporAsian shorts screen at MoMA through Thursday (9/16).
Posted by J.B. at 3:00 AM