No director portrayed the immigrant experience or the struggles of the common man with greater sensitivity than Elia Kazan, but to this day, he remains widely reviled on the left. Even a figure of Martin Scorsese’s stature took heat for presenting Kazan a lifetime achievement Oscar at the 71st Academy Awards. Yet for Scorsese, Kazan’s influence extended far beyond his early stylistic debt to the great filmmaker. Scorsese explains Kazan’s significant both to cinematic history in general and himself personally in Letter to Elia, an hour-long documentary he co-directed with Kent Jones, which screens with Kazan’s epic America, America at the 48th New York Film Festival.

Regardless of political controversies, Kazan’s reputation as an actor’s director is without peer. A co-founder of the Actor’s Studio, Kazan began his career on the boards before finding his calling as a theater director. Letter reminds us it was Kazan who helmed the Broadway premieres of Tennessee Williams’ A Streetcar Named Desire and Arthur Miller’s Death of a Salesman. Of course, he would revisit Streetcar on film with original cast-member and frequent collaborator Marlon Brando, one of several legitimate masterpieces he crafted. However, for Scorsese, East of Eden stands out first and foremost in his consciousness, claiming to have “stalked” the film through second-run cinemas as a boy.

Looking straight into the camera, Scorsese forcefully and lucidly describes Kazan’s contributions to stage and screen, with the help of generous clips from the director’s filmography. While Eden and the best picture nominee America, America capture the most screen time, Scorsese and Jones duly include Kazan’s arguably single most famous scene, Brando’s “could have been a contender” speech from On the Waterfront, the classic tale of union corruption.

In contrast, they are clearly uncomfortable addressing Kazan’s testimony to the HUAC committee. Kazan was a former Communist who became disillusioned after the Stalin-Hitler (Molotov-Ribbentrop) non-aggression pact came to light. Considering Communism a severely flawed ideology, Kazan defended his decision in an op-ed piece, but Scorsese and Jones largely ignore his motivations, preferring to gloss over the incident with vague language of “difficult choices,” which does little to serve Kazan’s memory. 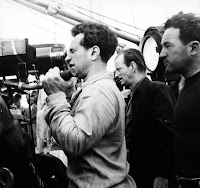 e is on solid ground when celebrating movie history. Letter is definitely an effective commercial for Kazan’s rich body of work, which really speaks for itself throughout the documentary. However, if any of his masterworks is under-represented, it would be Gentleman’s Agreement, a powerful examination of anti-Semitism that won Kazan his first Oscar.

Truly, Kazan is due for a critical renaissance, unblinkered by partisan score-settling. Letter is a well intentioned, mostly well executed effort to spur just that. Due to be included in a forthcoming Kazan boxset, Scorsese and Jones’ film screens this coming Monday (9/27) with a rare big screen presentation of America, America at the Walter Reade Theater, as part of the 2010 NYFF.
Posted by J.B. at 5:00 AM