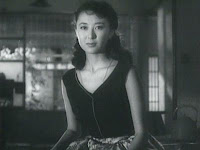 In post-war Japan, being a “salaryman” is a double-edged sword. They have a steady income and responsibilities, but no readily definable skill-set, which castsdoubt on their long-term security. Such is the reality for Shoji Sugiyama and his colleagues in Yasujiro Ozu’s Early Spring, the Japanese equivalent of The Man in the Grey Flannel Suit that screens this Friday at the IFC Center as part of their Ozu weekend series.

Sugiyama and his wife Masako seem to have a model marriage, but there are cracks beneath the surface. Having lost their only child years ago to a mysterious illness, she rarely joins him when he socializes with his work colleagues. Unfortunately, this allows an opportunity for things to develop between Sugiyama and Chiyo Kaneko, an extremely cute typist nicknamed “Goldfish” for her strikingly large eyes. While often claiming to visit his sick friend Miura with his jaundiced former mentor Onodera, Sugiyama half-heartedly falls into an affair with the more enthusiastic other woman. Of course, tongues start to wag, which ultimately causes trouble for both Goldfish and Sugiyama.

Unlike his domestic masterworks, Early Spring often feels rather emotionally distant. Even Ozu’s signature still life interior shots feel distinctly colder and less inviting. Arguably, this is largely due to the aloofness of Ryô Ikebe as Sugiyama, Ozu’s Tom Rath. Frankly, it is hard to understand how any woman would be attracted to him, let alone the stunning Keiko Kishi as Goldfish. 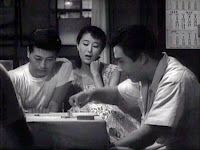 ances cynicism and humanity as the crafty but deeply flawed Onodera, while Kishi is both convincingly seductive and spirited as the other woman.

In a filmography largely consisting of masterpieces and masterworks, Early Spring does not have quite the same heft (despite being one of Ozu’s longer film at 126 minutes). While most of his domestic dramas might arguably be predictable, Early Spring feels more conspicuously so. Still, a minor Ozu eclipses most auteurs’ crowning achievements. He certainly captures a tactile sense of the conformity of the salaryman’s life as well as Japan’s budding spirit of corporate fidelity that would become celebrated during the country’s 1980’s boom times. Definitely worth seeing for Kishi alone, Early Spring screens this weekend (9/17-9/19) at the IFC Center.
Posted by J.B. at 3:45 AM