It is sort of like High School Musical in the outback, except the young Aboriginal Willie has had enough of school. Running away from Father Benedictus, his condescending headmaster, Willie must make his way home with the help of a colorful cast of characters in Rachel Perkins’ movie musical Bran Nue Dae (trailer here), which opens this Friday in New York.

Based on an iconic Australian book musical, Bran boasts a legitimately catchy, if sometimes gimmicky score. The story though, is a rather paint-by-numbers affair. As long as you remember Aboriginal people are innately good and Catholics, especially priests, are inherently hypocritical, you will know exactly where the film is heading every step of the way.

Willie has been sent to a far away Catholic boarding school to make something of himself. For his devout mother and the stern disciplinarian Father Benedictus this means becoming a priest. Willie has other ideas, mostly involving his sort of girlfriend, the much more mature looking Rosie. Unfortunately, she has fallen under the sway of Lester, the local roadhouse bandleader. When falsely accused of petty larceny by the Father, Willie has enough, setting off on the cross-country trek home with his vagabond “Uncle” and a dopey hippy couple. Road movie complications then ensue.

Oddly, the best numbers feature the dynamic Dan Sultan as Willie’s rival Lester, who one would not expect to like in the context of Bran’s teenaged love triangle. However, he tears through the title flag-waver and the pseudo-novelty song “Seeds that You Might Sow,” also featuring pleasing harmony vocals from Jessica Mauboy, a finalist on the Australian Idol equivalent. He even has the film’s best romantic ballad, “Nyul Nyul Girl,” which he delivers quite credibly to Rosie, nicely played by Mauboy. While it is sort of cheating to include a ringer like Tammy Wynette’s “Stand My Your Man” in the score, Mauboy’s somewhat funky rendition is surprisingly effective as well.

For a “bad boy,” Lester seems quite polite, which makes their scenes together appealing in a way that undercuts the rest of the film. Indeed, Sultan and Mauboy show some real potential star power, which is why the film’s focus on Willie is so frustrating. As the youthful protagonist, Rocky McKenzie does okay with his big number, the schticky “Nothing I Would Rather Be,” but he is a bit lightweight as a romantic lead. While as Fr. Benedictus, Geoffrey Rush simply synthesizes every ticky stereotype of Catholic priests seen in previous teen comedies into a ridiculou 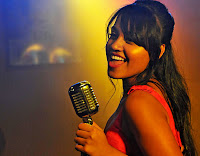 sly over-the-top caricature. Frankly, if his character were Aboriginal instead of RC, the Bran filmmakers would probably have been called in front of an Australian human rights commission.

Still, despite the simplistic characterizations and virulent anti-Catholicism, Perkins mostly keeps the mood cheerful and bubbly. She stages the dance numbers with an exuberant energy that helps carry the film along. At its best, Bran is cheesy fun, at its worst, it is rather churlish. A decidedly mixed bag with quite a few admittedly hummable tunes, Bran opens this Friday (9/10) in New York at the Village East.
Posted by J.B. at 12:45 PM