During the Cambodian genocide conducted by the Communist Khmer Rouge, nobody had time to mourn. People were too busy dying. They certainly could not stage a funeral requiem, because most musicians were executed for their alleged decadence. Yet, according to Buddhist theology, those who died without proper burial rituals would be condemned to linger on as restless spirits, making them victims at least twice over. Decades later, a large ensemble of musicians and performers will try to bring some healing to their nation with ambitious multi-media requiem production. Aviva Ziegler follows the development, rehearsals, and premiere of Bangsokol in the behind-the-scenes documentary, Wandering Souls, which screens during the 2019 Margaret Mead Film Festival, at the American Museum of Natural History.

Forty years after the [partial] fall Khmer Rouge, the impact of their crimes still scars Cambodian society. Classically-trained composer Him Sophy originally conceived Bangsokol as a synthesis of traditional Cambodian and Western classical styles, but the nation still lacks a symphony (or even chamber) orchestra. As a result, Him and the traditional musicians must forge partnerships with Taiwanese and Australian ensembles.

However, Cambodia can boast of an award-winning auteurist filmmaker with international accolades. That would be Rithy Panh (director of the extraordinary Missing Picture), a survivor of the genocide, who will produce and design the production triptych video backdrops. He definitely has the authority and credibility for such a project, but his strong personality and aesthetic judgement will cause some friction with the Western choreographer. 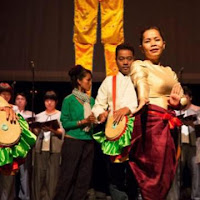 Wandering Souls is a sensitive and ultimately hopeful film that will intrigue some cineastes, just because of the glimpses it shows of Panh’s video contributions. However, it devotes as much or more time to the challenges of artistic collaboration than to exploring the lingering trauma of the Killing Fields era. It is all very respectful, but the relatively brief seventy-five minutes running time, the straightforward, unadorned style, and “making of” vibe make us wonder if Wandering Souls could eventually end up as an extra on a Criterion Rithy Panh BluRay release.

Of course, that means it is competently produces and captures some commentary worth hearing. Still, it would have been nice (and added a bit of meat to Wandering’s bones) if Ziegler had included an extended excerpt from the production to give viewers a more vivid taste for what it is like. Regardless, it is good that she documented the memories and reflections of Him, Panh, and their collaborators, notably including the Keo family of musicians. Recommended for Panh’s admirers and anyone looking for further context on the Cambodian Genocide after watching films like First They Killed My Father and Funan, Wandering Souls screens tomorrow (10/19), as part of the AMNH’s Margaret Mead Film Festival.
Posted by J.B. at 3:00 AM