Opening in Brazil: The Nightshifter 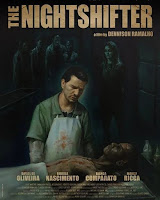 Remember how the characters on CSI: Miami used to talk about listening to the stories each corpse had to tell? Stênio does it directly. He can communicate with the recently deceased, like a corpse-talker. Regrettably, when he abuses his power, it leads to a whole lot of supernatural trouble in Dennison Ramalho’s The Nightshifter, which opens tomorrow in Brazil (and just released on VOD in the U.S.).

Stênio works all night scrubbing bodies in the morgue, returning home to his unappreciative and unfaithful wife Odete. His surly ten-year-old son is not so welcoming either. Only his eight-year-old-ish daughter Ciça is ever happy to see him. Fortunately, he has plenty of dead people to talk to.

Obviously, Stênio has an advantage when it comes to identifying bodies and determining cause of death. He is always respectful of the way he uses his uncanny communication skills, until the fateful day he discovers Odete’s affair with his neighborhood nemesis. Using inside information confided by a dead favela gang-member, Stênio convinces the boy’s brother it was really Odete’s lover who was responsible for the murder. However, his plans immediately go awry when the gang kills Odete as well. She is quite put out by her murder, as she explains to Stênio in no uncertain term. In fact, she will haunt the mild-mannered coroner’s assistant, possibly extracting vengeance through their children.

Ramalho & co-screenwriter Claudia Jouvin’s adaptation of Marco de Castro’s novel is dark and moody, with a vibe not unlike other recent Brazilian horror films, such as The Father’s Shadow and Hard Labor, but Nightshifter goes about its genre business more overtly and energetically. There are elements of The Grudge and The Sixth Sense here, but the gritty setting amid the outer edges of Sao Paulo distinguishes it from thematically similar films. Ironically, some of the film’s grossest bits come not from the proper horror but during Stênio’s day-to-day post-mortem business.

Daniel de Oliveira’s performance as Stênio is deceptively quiet, but he convincingly shifts from petulant brooding to seething psychosis. As Odete, Fabiula Nascimento similarly swings from not-so-passively aggressive contempt to spectacularly unhinged rage. She and Ramalho take things in a Medea direction and make us believe it.

We have seen people talk with the dead in movies before, but Nightshifter gives the practice a fresh twist. It definitely leans towards the more serious side of the genre, but there are still a number of impressively creepy sequences. Highly recommended for adventurous horror fans, The Nightshifter opens tomorrow (10/10) in Brazil.
Posted by J.B. at 6:00 AM