Harpoon: Genre Mayhem on a Boat

It is time for some sea stories for fans of hip, violent midnight movies, in the Tarantino tradition. There will be a sly narrator and plenty of booze. There will also be all kinds of sexual jealousy, class envy, and good old-fashioned bad attitudes. The pleasure craft “Naughty Buoy” will be like a homicidal version of the S.S. Minnow in Rob Grant’s Harpoon, which launches today on VOD.

Poor, unloved Jonah really does not like his best bud Richie very much, but he still hangs out with the wealthy lout, just to partake in his privileged life-style. He is also probably carrying a torch for Richie’s girlfriend Sasha, who mostly stays with him for the same reason. Richie has anger management issues, as we can plainly see in the opening scenes. To make up for his violent rage, Richie offers to whisk them off on a day trip in the Naughty Buoy. Obviously, he sounds like the kind of guy you would want to share a tight, confined space with.

Inevitably, the same suspicions and resentments will rear their head again, on the open ocean. Just when violence and murder appear inevitable, the three pseudo-friends will call a truce when they discover the engine has died and their store of food and fresh water is minimal. To survive, they will need to work together. Right, the outlook for that is not so hot.

On the other hand, their increasingly mounting troubles are quite funny—in a pitch-black kind of way. There is plenty of edgy (and often blood-splattered) humor here, but the funniest material comes from Brett Gelman’s ultra-droll narration—arguably the funniest omniscient voice-overs since Ron Howard’s vintage pre-Netflix Arrested Development narration.

Fortunately, Munro Chambers, Emily Tyra, and Christopher Gray are fearlessly and aggressively unlikable and profoundly unfit for society as Jonah, Sasha, and Richie. They are compulsively watchable, but nobody will care what happens to them, so just enjoy the mayhem. 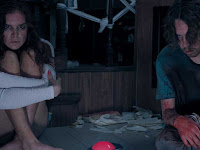 Maybe the biggest surprise Harpoon has to spring is the intelligence of Grant’s script (with contributions from Mike Kovac). There is an extended riff on Richard Parker, both the Poe character and the eerily similar historical cannibalism victim that really is clever (and rather literate). The dialogue is crisp and cutting, while the narration is even more so.

We can probably guess where this is all heading, but it is definitely worth taking the trip anyway. Based on Harpoon and the decidedly surprising Alive, Grant is emerging as a genre filmmaker fans need to keep watching. Highly recommended for everyone who enjoys their horror stripped-down and sarcastic, Harpoon is now available on VOD platforms, and screens this Friday (10/11) in Boulder, CO at the Dairy Arts Center.
Posted by J.B. at 6:00 AM