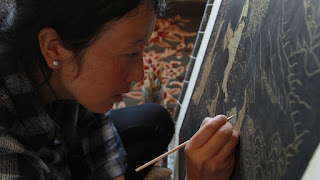 Tibetan Buddhism is an ancient religion, but it is starting to develop attitudes that are far more progressive than the misogynistic and materialistic ideology of the foreign Chinese military occupying its homeland. Women have only been accepted as thangka painters for a few years now and their ranks are still relatively thin. Nevertheless, a young thangka painter, wife, and mother will do her best to make a living from her art. Ming Xue documents her life in the short but aptly titled short documentary, A Woman Who Paints Thangkas, which screens during the 2019 Margaret Mead Film Festival, at the American Museum of Natural History.

It is not easy for Lutso and her husband (also a thangka painter) to make ends meet. Frankly, she often regrets choosing [thangka] art school over college. Nevertheless, she has slowly but surely made a bit of name for herself with her signature black-and-red thangkas. She also starts to take a more proactive approach to sales and marketing.

Ming’s approach is straight forward and aesthetically conventional, but she gives viewers considerably more than a tour bus window perspective on Rebgong in Qinghai province, one of the traditional centers of thangka painting. Lutso’s difficulties making a living from her art will surely sound familiar to scuffling artists around the world. However, in this case, the stakes are greater, due to China’s coordinated efforts to suppress Tibetan culture (which strangely goes unmentioned during the film).

Regardless, Lutso is a likable and talented subject, so she is definitely worth getting to know on film. Likewise, Ming’s doc is small in scale (and it clocks in at a mere twenty-five minutes), but it is still well worth seeing. Recommended for anyone interested in Tibetan Buddhism and women’s status in contemporary China, A Woman Who Paints Thangkas screens tomorrow (10/18), as part of the Through the Artist’s Lens programming block, during this year’s Margaret Mead Film Festival, at the American Museum of Natural History.
Posted by J.B. at 11:00 AM