They drink a lot of beer in Milwaukee. That might explain this movie. Somehow it manages to be utterly absurd and mysteriously otherworldly, in an extremely weird DIY sort of way. The hunt is on for a Great Lakes kaiju, but each plan produces evermore disastrous results in Ryland Brickson Cole Tews’ Lake Michigan Monster, which screens this weekend at the 2019 Flyway Film Festival.

As the blustery Captain Seacoast explains in his opening monologue/debriefing, he has assembled a crack team of oddballs to hunt the monster that killed his father. The details of his watery death to tend evolve with each successive telling, but whatever. Seacoast will have his vengeance and he is willing to pay handsomely for it. To that end, he has recruited “weapons expert” Sean Shaughnessy, sonar technician Nedge Pepsi, and dishonorably discharged Navy seaman Dick Flynn.

Visually, Michigan Monster is wildly stylish and gleefully inventive. Clearly, Tews never met a sight-gag he didn’t like. He definitely applies the Mel Brooks scattergun approach to comedy, but he is even more manic. When it misses, the film is an awkward viewing experience, like watching a fish flop around on dry land—but when it is funny, it is off-the-wall hysterical.

Tews similarly goes all in playing Seacoast, in a performance that might be something like Kelsey Grammer portraying Popeye the Sailor after pounding half a case of whiskey. It’s his show and he runs with it. Probably Beulah Peters makes the most headway undercutting him as the sardonic Pepsi. She also has an extended colloquy with Daniel Long’s Flynn on Seacoast’s mangled syntax that would make Howard Hawks beam with approval. 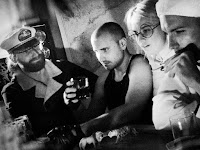 The entire cast is admirably game for Tew’s madness and they fully commit to their nutty personas. Yet, it is the art and design team as well as the camera crew (which includes most of the cast) whose work really distinguishes the film. Frankly, it is rather amazing how trippily surreal Michigan Monster gets.

Admittedly, this is perfect example of a love-it-or-hate-it movie, but nobody can fault Tews and company for a lack of effort and energy. Anyone who thinks they might be remotely interested should check it out, because it is hard to envision it getting a wide theatrical distribution. Recommended in the spirit of good humor for cult film fans, Lake Michigan Monster screens today (10/12) and tomorrow (10/13) at the Flyway Film Festival.
Posted by J.B. at 3:00 AM