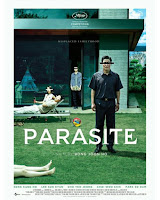 It is a derogatory term you might expect a class warrior apply to the idle rich or entrepreneurs might use to describe those who are out to sponge off the fruits of their talent and achievements. It cuts both ways, so it is the perfect title of Bong Joon-ho’s boldly ambiguous, Palme d’Or-winning Parasite, South Korea’s official foreign language Oscar submission, which opens today in New York.

Kim Ki-taek’s family only occasionally works odd jobs, but they have knack for freeloading (stealing) wifi. They live in a squalid basement apartment, but have no real interest in raising themselves out of it. However, they immediately recognize a golden opportunity when their son Ki-woo is invited to take over the college-prep tutoring of the Park family’s high school student daughter, from his former classmate.

Thanks to Ki-woo’s inside information, the Kim family conspires to replace the other household servants, while keeping their own familial relationships secret. Technically, they will have to work, but they enjoy plenty of luxuries on the sly, courtesy of the Parks. It all goes exactly according to plan, until a third party threatens to upset the new equilibrium.

Frankly, it seems like Bong lost control of his film to his characters, as if they came alive and commandeered their own movie, but that is a good thing—a very good thing. Bong’s last two films have been so bluntly and crudely didactic, they have been embarrassing to watch. Parasite is something else entirely. There are more than enough elements to support radically different readings of the film and it constantly challenges us to reconsider where our sympathies really ought to lie. In some ways, it could be compared to Joker, for the way it confounds expectations and undercuts lazy snap moral judgements. After all, just because characters have been bullied or have been economically and socially marginalized does not automatically make them morally superior.

Nevertheless, there are plenty of poor and distressed characters who are victimized in Parasite—by the Kims. Conversely, the rich Parks are not all bad. In fact, they just might have greater merits than the Kims (admittedly a low bar to clear). Mrs. Park is guileless and easily manipulated, but she is generally sweet-tempered. Mr. Park is a devoted family man, but he definitely expects the social hierarchy to be strictly respected (given what we learn about his new driver, Kim Ki-taek, it is hard to blame him). In contrast, Mr. and Mrs. Kim practically declare themselves to socialists occupying the Park home, as well as stone-cold sociopaths

In his fourth collaboration with Bong, Song Kang-ho is deceptively placid on the outside, but he quite effectively projects a sense of the rage roiling with in. Mr. Kim could very well be his most chilling performance to date. However, Jang Hye-jin manages to outdo him as the Lady Macbeth-esque Mrs. Kim. Lee Sun-kyun commands the screen and keeps viewers completely off balance as the snobbish Mr. Park. However, it is Cho Yeo-jeong who really deserves awards consideration for her work as the high-strung and naïve Mrs. Park. It is a very human and humanistic portrayal of a considerably flawed character.

This is easily Bong’s best film since Mother. It is also punctuated by moments of violence more shocking than anything seen in his prior films (even Memories of Murder). Yet, it all serves a very definite purpose. Honestly, we never knew he had something in him that was so conducive to contradictory interpretations, so yes, we’re impressed. Very highly recommended, Parasite opens today (10/11) in New York, at the IFC Center.
Posted by J.B. at 9:15 AM