Beyond Fest ’19: In Search of Darkness 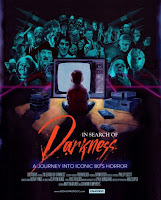 The 1980s were a golden age for low budget horror, because of a perfect confluence of conditions. VHS provided the distribution medium, video stores provided the market, and the Reagan Revolution provided an economic climate that rewarded entrepreneurship. Horror always had its indie maestros, but their ranks exploded in the Eighties, while established filmmakers still dabbled in the genre with studio backing. It all resulted in a bountiful harvest that continues to inspire filmmakers today. The stars, filmmakers, and special effects artists associated with the era’s great (and not so great) horror films take stock of their collective body of work in David A. Weiner’s In Search of Darkness: The Definitive 80’s Horror Documentary, which premiered during this year’s Beyond Fest.

With a 240-minute running time, it is reasonably fair of Weiner & company to use the word “definitive.” Although they introduce thematic topics along the way, the survey is mostly organized year-by-year and film-by-film. As you would expect (and hope), a great deal of time is devoted to series like Friday the 13th, Hellraiser, and Nightmare on Elm Street—not just once for the original film, but repeatedly returning to the franchises to give successive sequels their due.

There are an awful lot of films under discussion here. Fair consideration is given to the Halloween sequels that disappointed or confused and the Psycho sequels that far surpassed fans’ expectations. A great deal of time is given to films like John Carpenter’s The Thing and They Live, which are now widely acknowledged as significant cinema, but equal time is given to fan favorites, such as Fred Dekker’s’ Night of the Creeps and Stuart Gordon’s Re-Animator. The on-screen experts make their case for underappreciated films like Ghost Story as well as monster hits like the Lost Boys. Frankly, the only really conspicuously overlooked film has to be Twilight Zone: The Movie, which is notable for the crazy “Midnight Special” prologue and the tragic real life events that occurred during its production.

One of the nicest surprises in In Search of is the sense of humor Tom Atkins displays when discussing his films. Arguably, the only annoying segments feature the offkey political rants from Alex Winter (the guy in Bill & Ted, who wasn’t Keanu Reeves or George Karlin), but his crankiness is easy to dismiss.

Altogether, there are a lot of fond movie memories revisited here. Weiner’s doc will also inspire viewers to catch up with some films they might have missed back in the day. Four-hours is a challenging running time for further festival play, but this film would fit Shudder or a similar streaming service like a glove. Regardless, cheers to Beyond Fest for premiering In Search of Darkness, which is highly recommended for real deal horror fans.
Posted by J.B. at 6:00 AM