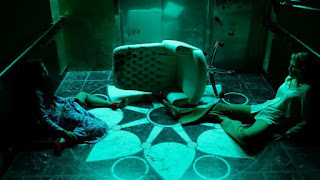 The Frankenstein motif definitely warns against the hubris of playing god, but it can often be boiled down to something even more fundamental: the monsters we create are the ones most likely to get us. That is certainly true of a farmer who is a little too handy with his hands and a celebrity CEO a little too prone to woke posturing in this week’s episode of Creepshow, which just premiered on Shudder.

Despite its impressive genre lineage as a Joe R. Lansdale short story adaptation, with David Bruckner helming, The Companion is a pretty conventional and unremarkable episode opener. The atmosphere is certainly creepy, but this yarn about a scarecrow that comes to murderous life is a whole lot like any number of films we’ve already seen. Arguably, what most distinguishes it is Afemo Omiliani’s tragically dignified performance as Brenner, the farmer who originally creates the titular straw man during an extended flashback. If you are in the mood for some rural horror, it will probably take the edge off, but you still have to wonder why Brenner’s farm is in the middle of a cemetery.

In contrast, director Roxanne Benjamin (whose credits include contributions to XX and Southbound) serves up a wickedly funny pitch-black comedy with Lydia Layne’s Better Half. Layne is a Ted-Talking feminist CEO who regularly accepts awards for empowering working women. However, when she passes over her lover for a coveted promotion, in favor of a nebbish bean-counting dude, it leads to all kinds of awkwardness. Feeling betrayed, Celia becomes aggressive and starts making threats. Before you know it, Layne has a bloody mess on her hands that she must covertly clean-up.

Better Half is gleefully macabre, diving head first into the one-darned-thing-after-another mayhem it unleashes. Basically, it is like Louis Malle’s Escalator to the Gallows with a gallon of blood splattered over it. For horror fans, it is good clean fun that perfectly represents the spirit of the original 1982 Creepshow film and the EC Comics that inspired it. As a bonus, it lands a few satiric potshots at the preening progressive brand of corporate culture.

Tricia Helfer vamps it up spectacularly as Layne. It is a brassy and bold performance, yet it remains believably tethered to reality. Similarly, Danielle Lyn radiates rage and resentment as the bitter Celia. When they play off each other, the sparks really fly. This is largely a two-hander (or possibly one-hander), but it never feels small or stagey.

Arguably, out of all four Creepshow episodes released so far, Better Half is the story that best fits its comic book aesthetic. It is darkly clever and delivers everything old school fans could desire. Highly recommended for Lydia Layne’s Better Half, Creepshow episode four is now available on Shudder.
Posted by J.B. at 10:00 PM