Two films released in the late 1970s had a disproportionate influence on the movie business in the 1980s. Stars Wars was one. This is the other. It inspired an army of imitators, a platoon of inferior sequels, and what is still considered the most violent Atari game ever. Its place in history has been codified by its selection for the Library of Congress’s National Film Registry—and its still scary. John Carpenter’s Halloween screens tonight in New York and probably somewhere near you, because its Halloween.

For some reason, all the parents in Haddonfield, IL always choose to enjoy a date night on Halloween, leaving their children in the care of sitters. Ordinarily, that means good money for Laurie Strode and her friends, but this year they will be stalked by a monstrous psychopath who has just escape from a criminal insane asylum. You know his name: Michael Myers. You also recognize his iconic William Shatner mask.

Logically, Myers should not be such a superman, since he has sat silently in an apparent catatonic state since murdering his older sister on a fateful Halloween at the tender age of six. Unfortunately, there is nothing logical about pure, unalloyed evil. Dr. Samuel Loomis understands that. He is a headshrinker with a license to practice and to carry, the latter because Myers so profoundly freaks him out. He will follow Myers back to his old hometown of Haddonfield, where the escaped patient will become obsessed with Strode.

Even in 1978, the screenplay, co-written by Carpenter and his producing partner Debra Hill, was not exactly revolutionary, but the way the elements combined was like lightning in a bottle. First and foremost, it is impossible to overstate how much Carpenter’s music adds to the overall vibe of mounting fear. It is not just the instantly recognizable opening theme. The entire soundtrack potently enhances the mood and worms its way into your ear.

Halloween also establishes the signature look of Carpenter’s films, thanks to Dean Cundey’s soft yet sinister lensing. In many ways, Halloween resembles an evil Norman Rockwell painting. Frankly, it is weird that there haven’t regular Cundey retrospectives, since he also shot films like The Thing, Jurassic Park, Psycho II, and the Back to the Future trilogy. 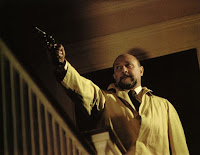 Of course, Halloween made Jamie Lee Curtis a star as Strode, the term-defining “final girl.” Even after seeing who knows how many psycho killer movies, her portrayal of Strode is still appealingly resilient and down-to-earth. Genre fave P.J. Soles also helps establish the naughty tradition of the non-final girl as Strode’s friend, Lynda Van der Klok. However, for some of us, it is the great Donald Pleasence who really stands out. As Dr. Loomis, he manages to be simultaneously arrogant and utterly terrified, in ways that are completely believable in the context of the film.

Carpenter put on a clinic in horror movie mechanics that few of his copycats bothered to study. He takes great pains to establish where each house in in relation to the rest of the neighborhood and the sight lines between them. Haddonfield is a fictional neighborhood, but you could easily find your way through it after watching Halloween. This movie holds up. In fact, it hardly feels exploitative thanks to Carpenter’s score and Cundey’s cinematography, or at least not very much. Highly recommended as a Halloween tradition, Halloween screens tonight (10/31) in New York at the Roxy Cinema and in Brooklyn at the Prospect Park Nitehawk—and who knows where else.
Posted by J.B. at 6:00 AM