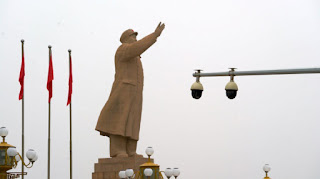 Frontline calls the cultural genocide currently underway in East Turkestan “the largest mass incarceration of an ethnic group since the Holocaust.” The severity and pervasiveness of the CCP’s campaign against the Muslim Uyghurs they proceed to document justifies such a chilling statement. The world has no shortage of crises right now (again, thanks to the CCP), but the Chinese Communist government’s systematic human rights abuses demand the public’s attention and outrage. Therefore, PBS and Frontline deserve credit for producing and airing China Undercover, filmed, directed, and co-produced by Robin Barnwell, which is now available on the Frontline website and the PBS app.

Access to East Turkestan is tightly controlled by the Party, especially for foreigners and independent journalists. However, Barnwell and his colleagues were able to recruit an ethnic Han Chinese businessman living in Southeast Asia to be their secret eyes and ears in the locked-down region. Thanks to his Han heritage, the man they dub “Li” had much greater freedom of movement than native Uyghur citizens. Indeed, we see him cruise through security checkpoints that stop and invasively search Uyghurs and ethnic Kazakhs (who have it just as badly in East Turkestan).

Probably two million Muslims are imprisoned in re-education camps, judging from satellite photos of the massive detention centers. Also judging from satellite intel, it appears numerous mosques have been razed into rubble. However, it is hard for Uyghurs and Kazakhs to speak openly, because of the CCP’s Orwellian surveillance apparatus. It is so finely tuned, residents must speak in code over phone lines, because certain words and phrases will automatically alert the authorities. If someone is sent to the camps, they are said to be “studying” instead.

Barnwell and “Li” literally depict Hell on Earth. Just when you think it can’t possibly get any worse, they expose another layer of oppression (like the intrusive quartering of Han Chinese snitches in Muslim homes, which have unique scannable bar-codes affixed to their doors). Any person of good conscience must conclude the CCP is orchestrating large-scale, genocidal crimes against humanity—specifically Muslims. Yet, the Islamist governments of the Middle East and hyper-sensitive Muslim interest groups in the West have remained deathly silent. Anyone who has ever criticized Israel for anything is a craven hypocrite if they do not vehemently denounce the CCP’s orchestrated campaign against the local cultures and Muslim faith of East Turkestan.

At least Frontline has exposed Communist China’s crimes for the world to see. This is outstanding journalism, produced at great risk to the lives and liberty of Li, Barnwell, and their fixers. The producers even approached the CCP for comment, receiving a few dissembling written statements for their efforts. China Undercover also warns the world that the CCP is looking to expand the implementation of these oppressive tactics to other regions. (The only mild criticism we can offer is their usage of the Chinese term “Xinjiang” for the region natives refer to as East Turkestan.) Urgently recommended for anyone professing any concern for human rights, Frontline’s China Undercover is now available online and on the PBS app.
Posted by J.B. at 6:00 AM