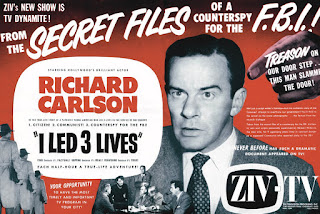 It is a shame William F. Buckley is no longer with us, for many reasons, but especially because he was so effective at ejecting fringe elements from the Conservative movement. He was decidedly critical of Joseph McCarthy, especially in terms of his strategy and demagogic style, but his judgement on the HUAC committee was much more measured. Even today, Buckley’s books are required reading for anyone looking to really understand the era now derisively referred to as the “Red Scare.” The truth many hoped to obscure was the fact there really were many active enemy agents under the direct control the USSR trying to infiltrate and sabotage American institutions. Herbert A. Philbrick became the FBI’s most famous counter-spy. He successfully infiltrated the infiltrators and lived to write a memoir about it. Since we’re all stuck inside, let’s binge something different, I Led 3 Lives, the syndicated 1950s TV show based on his book, which is currently available online (at least for now).

If you enjoy dramatic voiceovers, then the IL3L pilot will be your catnip or caviar. In it, we meet Herbert Philbrick, a mild-mannered ad executive, who is secretly a member of a Communist cell (it is pretty clear from documents declassified from the Venona Project and the old Soviet archives, members involved in political organizing for the CPUSA were also expected to serve intelligence gathering functions for the Soviet intel agencies). However, he was secretly spying on them for the FBI. His handler, Special Agent James Adams does not seem so protective, but he has knack for appealing to Philbrick’s sense of duty.

Frankly, IL3L is a pretty cool snapshot of 1950s noir. Yes, the voiceovers get a bit overwrought, but the pilot definitely captures a vivid sense of Philbrick’s ever-present paranoia. Teleplay writer Donn Mullally turns a particularly memorable phrase when Philbrick uses the term “Party Stomach” to describe the sensation he and his “comrades” feel during a cell meeting, where they expect their local leader will denounce a traitor. Richard Carlson, best known as the hero of the original Creature from the Black Lagoon, is appropriately tense and sweaty as Philbrick. However, Jeanne Cooper is a kick to watch chewing the scenery as the villainous cell leader, Comrade Sally. She is almost too diva-ish to be a proper Commie.

Philbrick, who appears as himself in each episode’s epilog would be horrified to see a candidate who lavished praise on Cuba and participated in a propaganda trip to the USSR at the height of the Cold War could come so close to winning a major party’s nomination for the presidency—and well he should be. We should all be alarmed. Frankly, the Democratic Party never should have allowed an extremist like Sanders into their Senate caucus and until they make it clear his brand of authoritarian politics is not welcome in their party, they will have to keep fighting its corrosive influence. Say no extremism, say yes to democracy, capitalism, and human rights (the first two are necessary for the third to exist), and join the social distancing I Led 3 Lives binge.
Posted by J.B. at 3:00 AM