World on Fire: WWII Breaks Out, in 7 Episodes 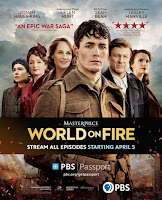 They are called “world wars” because they swept across nations, continents, and social classes. It was pretty much all-hands-on-deck for the United Kingdom in 1939. Both the well-heeled Chase family and the working-class Bennett family will become deeply involved in the war and awkwardly intertwined with each other in the seven-part World on Fire, created and written by Peter Bowker, which premieres this Sunday on PBS.

Aspiring jazz singer Lois Bennett and Harry Chase met and probably fell in love as anti-fascist activists, despite his snobby mother Robina’s efforts to break them up. Instead, the Foreign Office severs their romance by posting Harry (a gifted linguist) in Poland. While in-country, he has a fling with Kasia Tomaszeski, a pretty waitress. Nancy Campbell, a hawkish American radio journalist in the Martha Gellhorn mold, convinces Chase to marry Tomaszeski, to save her from the brutality of the inevitable National Socialist occupation. However, she crosses him up, sending her little brother Jan in her place. That certainly surprises Mother Robina.

To further complicate matters, Bennett is pregnant with Chase’s child, but she wants nothing to do with him or his family. Her father, Douglas Bennett (who became an ardent pacifist after suffering PTSD during WWI) is more pragmatic. He also has a wayward son to worry about. To avoid prison time, punky Tom Bennett enlisted in the Navy, but that will soon bring him into harm’s way.

Meanwhile, Campbell returns to Berlin, where she starts investigating the National Socialists’ euthanasia policies, while chafing against the restrictions placed on her by her minder/censor. It is personal for Campbell, because of her affection for a neighbor’s daughter, who suffers from epilepsy. She is also concerned about the safety of her nephew, Webster O’Connor, a doctor at the American Hospital in Paris, who is in secret romantic relationship with Albert Fallou, a French North African jazz musician.

Phew, that pretty much covers the scorecard of principal characters. Of course, their lives will intersect in multiple ways, well beyond Harry Chase’s tomcatting. Frankly, the Harry-and-Lois sudsy angst gets tiresome fast. On the other hand, Campbell’s struggle to report the truth is really smartly written, high-stakes drama. It also suddenly holds real world relevancy, given Mainland China’s recent expulsion of American journalists.

Frankly, Helen Hunt does some of her best work (maybe ever) as Campbell. She plays her with appropriate Rosalind Russell sharpness, but also conveys her vulnerability in scenes where her character is trying not to be vulnerable. Zofia Wichlacz is also terrific as Tomaszeski, who will be profoundly changed by war. Fans of Polish cinema will also appreciate the presence and gravitas of Tomasz Kot (the tragic co-lead in Pawel Pawlikowski’s Cold War) portraying Tomaszeski’s veteran father, Stefan.

Sean Bean gets to live past the first episode as Douglas Bennett and he brings a lot of humanity and pathos to the series. Julia Brown fairs better as Lois Bennett than Jonah Hauer-King as the cringy Chase, but their melodrama is definitely the weak spot of the series. Brown also gets to some off some solid vocal chops singing several era-appropriate jazz standards. However, Lesley Manville up-stages the entire London-based ensemble, playing tart-tongued Robina Chase to the hilt. Think of her as a younger, 1930s version of Downton Abbey’s Dowager Countess (Dame Maggie Smith).

Bowker does a nice job of juggling his many characters and settings, but viewers should understand a second season has already been greenlit, because he resolves practically nothing. The warfighting special effects do not always look so good on a larger screen, but he really focuses more on the characters. The series also downplays, but does not completely ignore the Soviet Union’s role carving up Poland with Germany. (Molotov-Ribbentrop is never mentioned.) Still, there is some rather cool jazz, especially during the Parisian club scenes. Recommended as an addictive high-class soap opera, World on Fire starts this Sunday (4/5) on most PBS stations nationwide.
Posted by J.B. at 10:00 AM