The Windermere Children on PBS 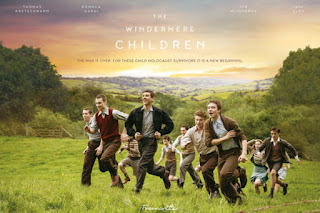 These children were survivors by definition. They managed to endure the National Socialist concentration camps, but the trauma was far from over. Yet, a special temporary refuge thrown together in an English country estate near Lake Windermere helped them transition from Hell on Earth to (in most cases) post-War British society. The four fateful months they passed at the Calgarth Estate are dramatized in the BBC-movie The Windermere Children, directed by Michael Samuels, which airs this Sunday on PBS.

Oscar Friedmann, a Jewish émigré child psychologist, convinced philanthropist Leonard Montefiore to fund the transitional school, believing the shared experiences of the students would help them process their grief and assist their integration into life after the camps. However, they only have two concerns when they first arrive: food and word from the Red Cross regarding relatives (who had mostly likely been murdered).

Although Friedmann dearly wants to counsel his charges, they are reluctant to open up to him. They are even more standoffish with Marie Paneth, a pedagogically rigid art therapist who is completely unprepared to confront the horrors the Windermere Children experienced. At least Jock Lawrence gets some of the older lads playing a bit of football. In fact, he quickly realizes teen-aged Ben Helfgott is loaded with natural talent.

In terms of screen drama, Windermere is pretty conventional, but well-intentioned stuff. The children are troubled, but fundamentally decent. Still, it is an aspect of the Holocaust we have rarely seen on film. There have been a number of films documenting the horrors of the camps and some like Sophie’s Choice that address the continuing ramifications years after the fact, but we rarely see the immediate (or mere weeks later) aftermath.

Windermere also has the distinction of featuring Thomas Kretschmann as the Jewish Friedmann, after he has portrayed dozens of SS officers and Stasi agents (true to form, you can see him portraying a Nazi agent again in the upcoming Penny Dreadful: City of Angels). He is really quite good as the humanistic but world-weary analyst-educator.

Screenwriter Simon Block tells an important story without resorting to a lot of easy sentimentality, while Samuels fully capitalizes on the lush Lake District environs. It is a small film, but a worthy film—and let’s face it, you probably have the time. Recommended as a bit of classy Sunday night viewing, The Windermere Children airs this Sunday (4/5) on most PBS stations nationwide.
Posted by J.B. at 3:00 AM