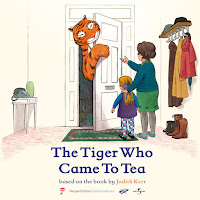 The example of Joe Exotic (and his equally dodgy critics) should make it clear big cats are not to be trifled with. Therefore, we can all agree hosting a tiger for afternoon tea is an inherently dangerous proposition. Nevertheless, it is hard to say no when one just up and knocks on your door, because when is such an opportunity likely to repeat itself? Sophie and her Mummy will indeed host the big cat in Robin Shaw’s UK Channel 4-produced The Tiger Who Came to Tea, which would have screened at this year’s Tribeca Film Festival, if the CCP and WHO had acted more responsibly during the pandemic breakout in Wuhan.

Sophie and Mummy had to stay home because of rain, so they decided to make the best of it and throw a tea party. Somehow the tiger smelled out their sandwiches and pastries. He is quite a shocking site on their doorstep, but it would be rude not to invite him in.

Rather surprisingly, there is always an aura of danger surrounding the tiger. As voiced by David Oyelowo, Sophie’s tiger friend is not so very different from Shere Khan in Disney’s animated Jungle Book. Although he never does anything violent, he eats way more than a reasonable guest would.

Tea is adapted from the beloved children’s book by Judith Kerr, in a sophisticated, old fashioned style reminiscent of Ethel & Ernest. It is one of the latest British animated TV specials based on popular kids’ books, following in the path of the Gruffalo and Revolting Rhymes films. Frankly, it is rather baffling why the major U.S. networks do not try to emulate this model, as a way of recapturing some cultural relevancy (like they used to in the early 1970s with Peanuts and Dr. Seuss specials).

Tiger or no tiger, Sophie has a loving relationship with her parents and they have fun together, which is nice to see on-screen. (For Sherlock and Doctor Strange fans, her Daddy is voiced by Benedict Cumberbatch, but it is a small role.) The short film looks classy, in an elegantly simple kind of way, and David Arnold’s score is quite jaunty. Highly recommended for young viewers, The Tiger Who Came to Tea would have screened during this year’s Tribeca.
Posted by J.B. at 6:00 AM