The Thing from Another World—The Original Classic

This might just be the U.S. military’s finest hour on film. They had already saved the world from the Axis powers during WWII and now only a small handful of officers and crew will stand between the world and a hostile alien invader. John Carpenter featured clips of this film in his classic slasher Halloween, before remaking it in 1982 (hewing much more closely to John W. Campbell’s original source novella, Who Goes There?). However, nobody has ever matched the authentic swagger and attitude of Christian Nyby’s The Thing from Another World (sometimes simply called The Thing), produced by Howard Hawks, which airs soon on TCM.

Captain Pat Hendry is the sort of leader who inspires confidence during times of crisis, but when it comes to romance, not so much. When the film opens, Hendry is taking a good deal of ribbing in the officer’s club over his disastrous date with Nikki Nicholson, a civilian employee in the Arctic research station Hendry’s crew often visits to resupply. It is there that he meets Ned Scott, a journalist and old friend of his co-pilot, Lt. Eddie Dykes.

Scott will hitch a ride with Hendry’s crew when they are ordered back to the Arctic station to investigate a mysterious crash site. It turns out the mysterious object was indeed a flying saucer. Rather unfortunately, the standard-operating salvage procedure results in the destruction of the craft (causing more grief for Hendry, especially from the research director, Dr. Arthur Carrington), but the alien occupant is preserved, frozen in ice. Hendry wants to keep him that way, but when it is accidentally thawed out, the Thing starts wreaking havoc. It turns out it is dashed hard to kill, because of its plant-like cell-structure, but fortunately the American military is endlessly resourceful.

The Thing (1951) is one of the greatest monster movies ever, not because of its special effects (which were really just okay for its era), but because of its superior characterization and dialogue. To this day, controversy remains regarding whether or not Nyby or Hawks really and truly directed the picture, with the rat-a-tat-tat pace of each exchange supporting suspicions of the latter (bringing to mind classics like His Girl Friday and To Have and Have Not, helmed by Hawks). In fact, both Hawks and Ben Hecht did uncredited punch-up work on Charles Lederer’s screenplay.

No matter who did what, The Thing (1951) perfectly captures the rhythms and cadences of military speech. It is all the more impressive, because Hawks and company were working around the Production Code. When Hendry tells Dykes and Lt. “Mac” MacPherson “just once I’d like to have a co-pilot and navigator who are wet behind the ears” we can tell he is really saying something much ruder and exponentially more explicit. 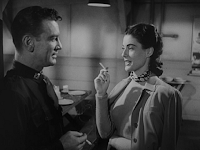 The Air Force characters also all carry themselves convincingly like military men, perhaps in part because a great number of them were veterans themselves, starting with the great (and still frustratingly under-appreciated) Kenneth Tobey, portraying Hendry. In addition, James R. Young, Dewey Martin, and Robert Nichols were also WWII-era veterans. Ironically, Robert Cornthwaite was probably the highest-ranking cast member as a former Army Air Force Intelligence Officer, but he plays the peacenik Prof. Carrington. Plus, George Fenneman (who would become famous as Groucho Marx’s announcer on You Bet Your Life) was a war correspondent with the U.S. Office of War Information (although uncredited, he is surprisingly credible as the more down-to-Earth Dr. Redding).

Young and Nichols are quite strong, creating distinctive personas for Dykes and MacPherson, while personifying insouciance-in-the-face-of-danger with their banter. This is even more true for Martin, as Bob the crew chief. Watching The Thing (1951) will make you wonder why he never became a big star (maybe it was a height thing). Arguably, Douglas Spencer (Ray Milland’s former stunt double) gives the all-time great comedic genre supporting performance as Ned Scott, earning big laughs as he skewers the Air Force bureaucracy and pomposity of the base commander, Gen. Fogarty, while never undercutting the tense tone of unearthly danger.

Yet, what really makes the film special is the Tracy-Hepburn chemistry shared by Tobey and former fashion model Margaret Sheridan (Hawks was determined to make her a star, but the timing was never right). Hepburn is indeed an apt adjective for Sheridan, given her professional wardrobe (slacks in 1951, quite appropriate for the North Pole) and demeanor. Arguably, her character and portrayal are under-heralded for their feminist significance. Although her official job largely entails clerical support, Hendry and the crew essentially welcome her into their circle and treat her like an equal. Twice when she asks if they want coffee, Hendry responds, no, but come in and join us anyway.

Everybody knows it is Gunsmoke’s James Arness playing the Thing, but that is really the least interesting aspect of the film. It is the attention to process and the knowing portrayal of how military units really function under stress that makes it such an enduring classic. The way Tobey and Sheridan smoke up the lens certainly does not hurt its timelessness either. This isn’t just a great monster movie. It is one of the best films ever produced in Hollywood. Very highly recommended The Thing from Another World airs early Tuesday morning (4/7) on TCM—and it is available on most VOD platforms.
Posted by J.B. at 6:00 AM