Recent news of Nicolas Maduro’s indictment for terrorism and drug trafficking certainly would not have surprised Herbert Philbrick. There is a long history of Communist governments collaborating with drug cartels, for money and to undermine the social fabric of the West. Back in 1991, Frontline (not exactly a rightwing echo-chamber) was exposing the complicity of Castro’s regime. Philbrick himself will help the FBI bust a Soviet-sponsored ring of pushers in “Dope Photographic,” our next episode of the I Led 3 Lives binge, which is findable online and also available on Alpha Video’s non-chronological I Led 3 Lives, Volume 1.

As an undercover counter-spy infiltrating a Communist cell, Philbrick has learned to live with the constant fear of detection (and liquidation). Nevertheless, his FBI handler is really exposing him to undue risks when he recruits him to help their investigation into a Soviet-backed dope ring. It turns out Philbrick’s office has a perfect view of one of the street-corners the pushers are thought to be working. His long-established photography hobby also gives him cover for buying a movie camera to record foot traffic. Nevertheless, Philbrick’s Communist masters are still suspicious, because fear and paranoia are the instruments they wield to keep their lackeys fearful and obedient. 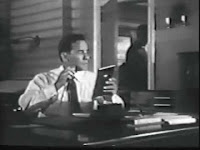 There are no guest stars of notable fame, but Michael Riordan definitely stands out, albeit in a very 1950’s kind of way, as Leonard Kirby, an ad agency-beat reporter. In fact, it seems rather baffling that this episode is his only IMDB credit. However, director Eddy Davis and star Richard Carlson really double-down on the paranoia. In fact, they way Philbrick uses the Party’s institutionalized paranoia against one of his would-be minders is rather clever.

Two episodes into the binge, the uber-noir style and explicit anti-Communism of I Led 3 Lives is still as refreshing as a tall glass of ice water in an arid desert. It is not as stylish as Peter Gunn, which had the benefit of a super-cool jazz soundtrack, but both half-hour dramas were cut from similar aesthetic cloth. Highly recommended for the nostalgia and the message, I Led 3 Lives is currently available online and on DVD.
Posted by J.B. at 6:00 AM