TVB is not what it used to be. Recently, pro-democracy viewers and advertisers have started boycotting the Hong Kong network, due to its pro-Beijing, anti-“One China, Two Systems” biases. However, Ah Hoi and his elderly mother Ah Ma still watch the broadcast channel out of habit. Old ways die hard and so do old hitmen in Linhan Zhang’s short film The Last Ferry from Grass Island, which would have screened during the 2020 Tribeca Film Festival, had the CCP not covered up the extent of the Wuhan outbreak and falsely denied it involved human-to-human transmission. (Some selections have still been made available for press coverage.)

Ah Hoi is old school. He still speaks Cantonese and watches 1980’s movies, like Police Story (co-starring Last Ferry’s lead actor Tai-Bo). Of course, he does not panic when a young hired gun sneaks onto his fishing boat to cap him, especially when he recognizes she is his former Mainland Chinese protégé, Xiao Ma.

Last Ferry unfolds as a wistfully elegiac slow-burn thriller, but astute Hong Kong watchers will read some between-the-lines commentary regarding the HK localism movement and traditional HK culture. To put it bluntly, this is a film about a Mainlander sent to murder a pre-1997-generation Hong Konger, after all. 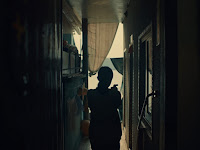 Regardless, the Golden Horse Award-winning Tai-Bo is perfectly cast as the sly, grizzled Ah Hoi, giving a masterclass in subtle world-weary humanism (from a hitman, no less). The tenderness he shows Ah Ma (played so naturally and realistically by Yee Yee Yeung) is also quite poignant. Wang Yang also does some nice, understated work as Xiao Ma, but Tai-Bo draws the viewer’s attention like a magnet.

This is an impressively crafted film, helmed with astute sensitivity by Zhang. It also looks and sounds great, thanks to Peilun Wu’s delicate but non-intrusive music and the intimate cinematography of Giorgos Valsamis. It leaves you with a pleasant melancholy. Very highly recommended, The Last Ferry from Grass Island would have screened at this year’s Tribeca Film Festival.