This is one sinister case of muscle memory. Much to his surprise, a recovering concert pianist suddenly finds he has a knack for throwing knives after the hands of a murderer are grafted onto his crushed arms. However, it is the deranged doctor who is the real danger to society. That stands to reason, since he was played by Peter Lorre making his American film debut in Karl Freund’s Mad Love, which airs as part of the TCM Classic Film Festival 2020 Home Edition, brought to you by the CCP, the WHO, and the viral outbreak they denied existed until it was too late.

Dr. Gogol loves diva actress Yvonne Orlac, but he is unaware she has already wed pianist Stephen Orlac, who has been away from Paris on an extended tour. Now that his return is imminent, she has announced her intention to retire from the stage. That prompts a lot of creepy behavior from Gogol, including buying her life-like statue from the city’s wax museum. Yet, suddenly he has the opportunity to be her hero when Orlac is the victim of a gruesome train derailment. Thanks to his brilliance, Gogol saves the day by (unbeknownst to them) transplanting the dexterous hands of an American killer freshly beheaded by the guillotine.

Of course, the rehab process is long and difficult, but Orlac is also rather unsettled by his hands’ apparent habit of tossing knives of their own accord, during moments of extreme stress. Gogol tries to be a decent chap about things, but his heartsickness eventually brings out the doctor’s dark side, spurring him to exploit his patients fragile state of mind.

Mad Love was produced by MGM rather than Universal, but it features three iconic actors of 1930s genre movies: Lorre (who needs no introduction), Colin Clive (who played Henry Frankenstein in the first two Frankenstein films), and Keye Luke (who had already started portraying Charlie Chan’s #1 son). Nevertheless, there is never any question this Lorre’s show from start to finish. He uses his entire M trick bag of bulging-eyed manic tics, but he still conveys Gogol’s acute pathos. Arguably, Gogol deserved better, but jealousy and obsession turned him into a monster. 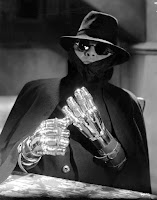 In contrast, the drama of the Orlacs relationship is far and away the weakest stuff in the film. Seriously, who cares? Still, Clive is not shy when it comes to break-downs and implosions (when he died young in 1937, Lorre served as one of his pallbearers). Honestly, Luke does not have much to do as Gogol’s earnest assistant, Dr. Wong, but one could argue it was sort of progressive to cast him as a serious, professional supporting character. You could even say Dr. Wong saves the day when the disturbed Gogol just walks away from a surgery underway.

This is classic Peter Lorre. Other adaptations (and rip-offs) of Maurice Renard’s The Hands of Orlac would lean more heavily into the killer hand trope, but Freund’s Mad Love also features wax museums and even motifs reminiscent of The Phantom of the Opera. It all still looks stylish, thanks to the black-and-white cinematography partly credited to Gregg Toland (best known for lensing Citizen Kane), but it bears repeating: Lorre is the primary reason to watch. Recommended for classic 1930s and 1940s horror fans, Mad Love airs Saturday morning (4/18), as part of TCM’s stay-at-home Classic Film Festival.
Posted by J.B. at 6:00 AM