Into the Dark: Pooka Lives 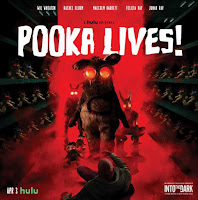 Forget Chuckie. Forget Annabelle. Forget those nasty little Nazi puppets in the Puppet Master movies. Pooka is the heavy-weight champion of monster dolls. You can blame the internet for that. Online weirdos just can’t get enough of Pooka urban legends in Alejandro Brugues’ Pooka Lives!, the first sequel of Blumhouse feature-length anthology series, Into the Dark, which starts streaming today on Hulu.

Nacho Vigalondo’s Pooka! was dark, twisted, and moody, making it perfect for Christmas viewing. Brugues, the Juan of the Dead director, moves the sequel in a hipper, more irreverent direction. As is always the case in horror movies, the internet is a destructive force, before it even latches onto Pooka. Derrick, an aspiring New York writer, has returned to his childhood home of Spring Valley, after an internet influencer’s minions wrecked his personal and professional lives. His now-married high school friends, Molly & Matt, take him in, even though he is still being trolled and harassed.

Derrick has accepted a copy-writing job at the company that manufactures Pooka dolls, where his ex, Susan just so happens to work in the marketing department. Although he is determined to return to the City, Derrick enjoys reconnecting with old friends, including the formerly fat Benny, who is now an impressively fit sheriff’s deputy. During their first night of drinking, they post a larky internet challenge to invoke Pooka—inviting his wrath if you have been “naughty.” Of course, it quickly goes viral once Derrick’s online tormentor posts his Pooka Challenge. Needless to say, he has been very naughty, so Pooka mercilessly carves up the loudmouth. Inevitably, Pooka will come looking for Derrick’s friends too, but he grows steadily more monstrous as the internet continues to embellish his legend (actually coming to look a lot like Frank the bunny in Donnie Darko).

It is generally smart of Brugues and Blumhouse to take a decidedly different tack for the first Into the Dark sequel, especially since screenwriter Ryan Copple so cleverly riffs on urban lore and internet memes. This is probably the geek-friendliest film in Into the Dark series, especially due to the casting of fan-icons Felicia Day and Wil Wheaton (in a smaller role).

In fact, Day and Jonah Ray are very funny as the hippy-dippy Molly and the schlubby Matt, while developing some believably “lived-in” and rather appealing married couple chemistry together. Malcolm Barrett and Lyndie Greenwood also have better-than-average horror movie chemistry as Derrick and Susan. Plus, Gavin Stenhouse earns a number of laughs playing Deputy Benny, as he refreshingly subverts the tired horror cliché of the dumb, useless cop.

Frankly, Pooka Lives is more fun than the original, thanks to the nutty mayhem and the sly attitude. Brugues and his ensemble show off a lot of nimble comedic timing, but they still take care of big, furry doll slasher business. Highly recommended for horror and monster fans, Pooka Lives! premieres today (4/3) on Hulu, as part of the current season of Into the Dark.
Posted by J.B. at 6:00 AM