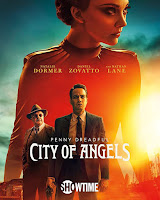 Fiorello La Guardia never whined in the media about Italianophobia. Instead, he was louder than anyone criticizing Mussolini. He even recorded propaganda radio broadcasts in Italian that were transmitted into the fascist country. Frankly, there really isn’t anyone notably following his example with respect to Islamic terrorism today, except Ayaan Hirsi Alli. La Guardia is also the reason why National Socialist agents of influence are operating in Los Angeles instead of New York, at least according to Lewis Michener, a cynical anti-fascist cop. He and his new Hispanic partner must investigate a racially-fraught murder case that has been further complicated by an evil supernatural entity in the first season of Penny Dreadful: City of Angels, which starts Sunday night on Showtime.

We silly mortals do not realize all our strife is really caused by the shape-shifting demon Magda to expose all of humanity’s hatred and pettiness to her rival, the crypto-Catholic cult deity Santa Muerte. The problem is Santa Muerte isn’t willing to help play defense. Instead, she is content to merely collect the souls murdered in Magda’s wake.

It starts when Michener and freshly promoted Mexican-American Detective Tiago Vega are assigned to the case of a rich Beverly Hills family ostensibly murdered by a Mexican cult. However, the flatfoots quickly deduce the over-the-top face-painting was really to draw suspicion away from the real killer. That leads Michener and Vega to the victim’s employer, a massive Evangelical ministry fronted by Sister Molly, an Aimee Semple McPherson-like figure.

Unfortunately, their investigation will be interrupted by a riot orchestrated by Magda, right in Vega’s back yard. Local activists were there to protest the motorway closeted Nazi-sympathizing Councilman Charlton Townsend rammed through the neighborhood. Much to his horror, Vega is forced to shoot his own trade unionist brother, after Magda possesses his body. To make matters worse, their youngest brother Mateo sees him do it. That drives the junior Vega into the arms of a Pachuco gang led by one of Magda’s personas.

Meanwhile, Michener pursues an active off-duty investigation of German agents with his old kvetching cronies. They are definitely outmanned and outgunned, so the cop will forge a risky alliance with Benny Berman, Meyer Lansky’s top lieutenant in LA. Dentist and local German-American Bund leader Dr. Peter Craft is not even on their radar yet, but Magda is playing with him big-time, in the guise of an abused German war-wife, whose plight fans his anti-Semitism.

City of Angels is a follow-up in-name-only to the original Penny Dreadful, which was dramatically better in nearly every respect. To start with, the tropes of gothic horror are always going to be more fun than race wars and identity politics. More problematically, none of the supernatural business involving Magda and Santa Muerte is scary at all. Instead, it is just lame.

What works is Nathan Lane’s wise-cracking portrayal of Michener and his dogged pursuit of Nazi agents. His riveting interrogation work in episode six (1-6 were provided to reviewers) is really awards-worthy. Lane and Daniel Zovatto also bicker and banter effectively as the odd couple partners, but the latter looks understandably listless during scenes of Vega family drama.

As an added genre bonus, the great Lin Shaye brings the attitude as Michener’s fellow volunteer spy-chaser, Dottie Minter. Despite City of Angels’ heavy-handedness, Brent Spiner depicts police Captain Ned Vanderhoff with subtlety and complexity, making him more interesting as the show progresses. Unfortunately, the opposite is true of Rory Kinnear (the only cast-member of the original Penny Dreadful returning in a new role) as the cringe-inducing Craft. Natalie Dormer is badly miscast (and frequently flat-out boring) as Magda and her human guises. However, Brad Garrett nearly redeems the whole mess with his sly, shark-like turn as Berman.

For what it’s worth, City of Angels gets better as it goes along. However, there is no getting around the fact the show is built on elements that just don’t work. It is also too preachy and weirdly disinterested in the hardboiled noir tradition it is supposedly paying homage to. Despite the merits of Lane, Garrett, Spiner, and Shaye, Penny Dreadful: City of Angels is not recommended when it premieres Sunday night (4/26) on Showtime.
Posted by J.B. at 10:00 AM