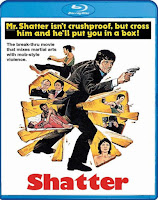 This would be Peter Cushing’s final feature film for Hammer, but he did not reprise any of his famous gothic characters. He only shot for four days, but they were all on-location in Hong Kong, so at least he got an exotic trip out of it. Stuart Whitman played the title character but the real stars are the gritty 1970s-era HK locations seen throughout Michael Carreras’s Shatter (a.k.a. Call Him Mr. Shatter), Hammer Film’s second not-so great co-production with the Shaw Brothers, which releases today on BluRay.

Shatter is a hitman who usually contracts out his services to the Western intelligence agencies. Unfortunately, the Hong Kong drug syndicate tricked him into executing the particularly nasty and destabilizing assassination of an African dictator. When Shatter complains to his regular HK contact, he finds he is now persona non grata. Even worse, Hans Leber, the money man for the contracting cartel, refuses to pay his fee.

Paul Rattwood, the local British station chief gives Shatter one day to leave town, but he is not going anywhere until he gets his money and some payback. Fortunately, he recruits a talented martial arts expert, Tai Pah, who can help keep him alive. However, Shatter is even more interested in Tai Pah’s sister Mai-Mee, a strictly professional masseuse working in a dodgy massage parlor.

Hammer’s first Shaw Brothers co-pro was the unfairly under-rated Legend of the 7 Golden Vampires, in which Cushing returned to the iconic role of Van Helsing. However, Shatter was sort of an additional throw-in from the start. It probably did not help that the original director, Monte Hellman, was fired early during the production, with Hammer president Carreras taking over.

Nevertheless, Lung Ti has several cool fight scenes as Tai Pah and his fellow Shaw Brothers regular Lily Li is warmly charismatic as Mai-Mee. The real problem is Stuart Whitman, who was badly miscast as the steely Shatter. Reportedly, he was physically ill during production—and he looks it. Of course, Cushing does his thing as Rattwood, but Anton Diffring (whose spotty previous Hammer tenure included their unsold 1958 pilot, Tales of Frankenstein) basically phones it in as Leber.

Nevertheless, Shatter serves as a fascinating time capsule of Hong Kong street life. Essentially, this was over three lifetimes ago for Hong Kong, while it was still a crown colony, but before its go-go capitalist glory years, before “One China Two Systems,” and before the CCP started killing the goose laying the golden eggs. This was a tough, free-wheeling city, where just about anything went.

There is definitely fun stuff in Shatter, but it does not hold together as a coherent whole, as does 7 Golden Vampires or the Golden Harvest-Australian co-production The Man from Hong Kong, which would be released the following year. Still, how often do you get to see Peter Cushing and Lung Ti play a scene together? Recommended mostly for diehard Hammer and Shaw Brothers fans, Shatter is now available on BluRay.
Posted by J.B. at 3:00 AM