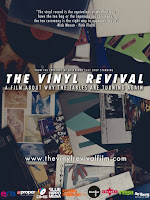 Some people are missing restaurants and theaters, but a lot of us are feeling serious withdrawal for our favorite record stores. Of course, it is probably best that we are not pawing through grubby stacks of new arrivals right now. Yet, indie record stores have become important community cultural centers. Pip Piper analyzes the surprisingly robust state of the vinyl business (or at least it was then) in the short documentary, The Vinyl Revival, which releases today on DVD.

Of course, there should be an asterisk attached to this review, because absolutely none of the record store proprietors who appear in Piper’s film ever state a complete shut-down lasting well over one month would really help grow their businesses. With that caveat, things were surprisingly optimistic a few week ago. Piper informally surveys the field, using Graham Jones’ (then and hopefully now still) somewhat inaptly titled book The Last Shop Standing as a guide. Dozens of independent record stores were opened last year and the year before. While the “music industry” has been stagnant, the vinyl format has posted dramatic and consistent year-over-year growth.

Frustratingly, Revival is very indie-rock (or whatever) -centric, but many of the reasons cited for the format’s renewed appeal are consistent across genre. These include cover art you can actually see and enjoy, as well as the tactile please of holding a gatefold album while listening the music it holds. Nobody really goes into the superior sound of vinyl, but that is a very real thing.

Most of Piper’s talking heads relate to vinyl through very contemporary music, but he gets a jazz perspective from Portishead band-member Adrian Utley, who also played with Big John Patton and Art Blakey’s Jazz Messenger. It is definitely pleasant to listen to him wax poetic over Blakey’s Blue Note album, Like Someone in Love (which he hand-sells quite effectively). The biggest musical celebrity featured would probably Pink Floyd’s Nick Mason, who you have to respect.

It is encouraging that there is a growing market for the old school authenticity LPs represent. However, anyone who has been a part of the vinyl renaissance will find Vinyl Revival rather basic. It is nice enough, but it really only skims the surface. Recommended mostly for patrons of the many British record shops it visits, The Vinyl Revival is now available on DVD.
Posted by J.B. at 5:45 AM