Fantasia ’20: Sheep Without a Shepherd 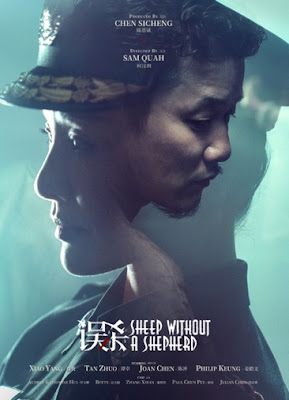 Li Weijie is sort of like Remington Steele, except he uses his encyclopedic knowledge of movies to obscure a crime rather than solve it. Nobody would begrudge him, since his daughter was the real victim. Unfortunately, the roofying creep she accidentally sent to his eternal judgment happened to be the son of the police chief. The two concerned parents face-off against each other in Sam Quah’s Thai-set, Chinese-produced Sheep Without a Shepherd, which screens as an on-demand selection of the 2020 Fantasia International Film Festival.

Li stretches his income as a freelance IT guy as best as he can, because his daughters are the apple of his eye. Pingping is a teenager with great potential, but she was easy prey for the scummy Suchat at their youth leadership camp. When he shows up to blackmail her for more, things escalate into violence. Returning home just in time to take charge of the aftermath, Li knows better than to trust the cops. Instead, he uses his love of movies as a guide to construct a false alibi for his family.

Having a fistful of receipts for the day in question, Li takes his family back to retrace his steps, but they go out of their way to talk-up potential witnesses. He expects by the time the cops interview them, everything will blend together in their heads and they will inadvertently confirm Li’s timeline. The problem is Police Chief Laaorn is no dummy, just an excessively indulgent mother.

Sheep is technically a remake of a Malayam movie, but the film that most directly influences Li Weijie’s plan is Jung Geon-sub’s Montage. It isn’t bad, but Sheep is better—at least if you disregard the ridiculously moralizing epilogue, presumably tacked on to satisfy the Chinese censors. (He also takes some inspiration from Billy Wilder’s Witness for the Prosecution, which is still better than either film.)

As Li, Xiao Yang makes a rock-solid everyman worthy even of Hitchcock. However, it is Joan Chen (like you’ve maybe never seen her before), who will blow viewers away as the utterly ruthless Laaorn. She is electric on-screen, while Philip Keung provides an intriguing counter-balance as her political ambitious (and paternally less patient) husband, Dutpon.

Quah maintains the perfect one-darned-thing-after-another pace and dexterously lays the groundwork for each twist. Hopefully, he can release his preferred director’s cut sometime in the future, because the denouement obviously doesn’t fit. For now, Sheep Without Shepherd is still recommended as a suspenseful thriller, screening as an on-demand selection of this year’s Fantasia.
Posted by J.B. at 6:00 AM