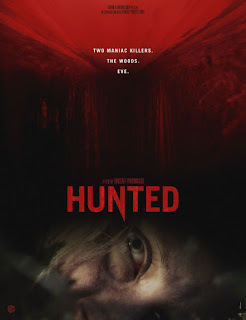 “The Handsome Guy” and his accomplice originally did not set out for another “Most Dangerous Game”-style people-hunting excursion. They aren’t that sporting. However, when their latest prospective victim escapes into the woods, they inevitably chase after her. It turns out the pagan spirits of nature will pick a side (and it won’t be the predators) in Vincent Paronnaud’s Hunted, which screened at this year’s Fantasia International Film Festival.

The campfire-story prologue tells us this wooded setting is somewhat akin to that of In the Company of Wolves, but the forest has its own collective, Jungian, Gaia-goddess consciousness. That is about the only good news of the night for Eve (hmm, wonder why they chose that name? Maybe in honor of Eve Arden?). After a night drinking in a strange, vaguely Euro, English-speaking-with-an-accent town, Handsome and his accomplice stuffed her in their trunk, with the intention of doing terrible things to her. When a freak accident sets her free, she is off and running. The psychos would seem to have all the advantages, but the spirit of the forest will do what it can to level the playing field.

Even with the stylized preamble, the first two acts of Hunted still play like traditional neo-grindhouse victimization-and-revenge horror. However, things get interesting in the third act, when Paronnaud brings back the campers from the prologue. The action gets really messy and complicated, but in inventive ways.

Still, this is definitely quite far afield from Paronnaud’s classy collaborations with Marjane Satrapi, Persepolis and Chicken with Plums. Even Paronnaud’s super-cool zombie short Territory has greater cinematic scope. Yet, it should be readily stipulated, the payback pays-off in a big way.

As Eve, Lucie Debay truly goes all in. The last thirty minutes or so represents some remarkably ferocious physical work on her part. You also have to wonder if one scene was intended as a Braveheart reference (anyone care for some woad?). Arieh Worthalter is also seriously creepy as the psycho pick-up artist. Their fight scenes together are viscerally intense and quite well choreographed.

Hunted has its grungy thrills, but it is not as original or enlightened as its champions suggest. These days, it is presented as feminist pushback against patriarchy, but the exact same film would not have been out of place in the 1980s, exemplifying the dangers of getting drunk and hooking-up with strangers. Recommended for fans of payback exploitation films, Hunted will be distributed by Shudder, following its Fantasia screenings.
Posted by J.B. at 6:00 AM