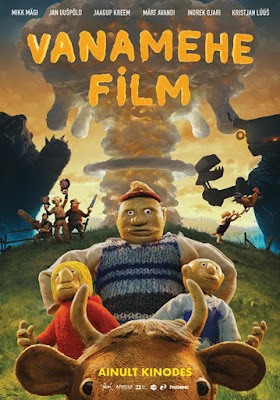 Milk, it does a body good—except when it causes one of those freak Soviet-era milking disasters. The titular Estonian dairy farmer remains so spooked by his rival’s misfortune, he milks the heck out of his poor bossy. Fed up with it all, she runs off, not caring that her udder will eventually explode, drowning the valley in milk. To avoid catastrophe, his city-slicker grandchildren help him search in Oskar Lehemaa & Mikk Magi’s utterly deranged stop-motion animated feature, The Old Man Movie, which screens as an on-demand selection of the 2020 Fantasia International Film Festival.

Do not look to Old Man Movie for accurate lessons in agricultural science or really any kind of real-world applications. Having lived in cities all my life, I’m still pretty sure cows do not explode like atomic bombs if they go a day without milking, but fine, let’s just run with it anyway. Regardless, that is what happened to the villainous “Old Milker,” during the black-and-white newsreel prologue, when his cow just decided to stop giving milk. Of course, he deeply resented it when another diary farmer replaced him as the town’s milk supplier.

That would be the Old Man, Priidik, Aino, and Mart’s grandfather, who is less than thrilled to have his grandchildren for the summer. The teenagers, Priidik and Aino are not too happy about it either, but Mart, the young science geek is delighted. It is the sensitive Priidik who causes all the trouble by literally leaving the barn door open. Reluctantly, Grandpa takes the teens with him to search for his cow, leaving Mart behind, to create more chaos with his mad genius tinkering. Meanwhile, Old Milker is also hunting for Grandpa’s cow, determined to behead her, before she explodes.

If you think that sounds crazy, just wait till you see the scatological wonders and delights Lehemaa & Magi have in store for viewers, including an up-close tour of a bear’s GI tract. Anyone who is easily offended will not survive the film’s first five minutes. However, it becomes rather impressive, even intoxicating, to see how deliriously tasteless Lehemaa and Magi willingly go. Frankly, the stop motion animation is almost on par with early Aardman, but the humor and subject matter is like an unholy fusion of South Park, A Town Called Panic, and Ujicha’s off-the-wall “geki-mation” films.

Seriously, Old Man Movie is quite some accomplishment—yes, indeed it is. Every ten minutes or so, Lehemaa & Magi find a way to top themselves, or stoop lower, depending on your capacity for gross-out humor. Sometimes films in this vein feel like they started a handful of standout gags that a skeletal narrative was stretched around, but the lunacy is consistent—and consistently escalating, in this case. Highly recommended for fearless fans of cult animation, The Old Man Movie screens as an on-demand selection (geo-locked for Canada) of this year’s Fantasia.
Posted by J.B. at 3:00 AM