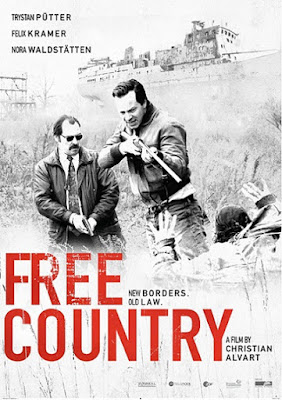 Patrick Stein, from West Germany, is a fiercely honest cop who will investigate the politically protected, no matter the consequences. East German Markus Bach has made a career arresting those who legally guilty of violating unjust laws. Thanks to reunification, they must work together solve a brutal double murder in Christian Alvart’s Free Country, which screens as an on-demand selection of the 2020 Fantasia International Film Festival.

Back in the West, Stein opened up a corruption case against the brother of his superior, so now he is on assignment in this former-GDR backwater. He has been partnered-up with the beefy Bach, who still takes a more physical approach to police work. However, both cops are rather put-off by the town’s callous disinterest in the fate of the missing (and presumed dead) Kraft sisters. The local brass wants them close the case quickly, but they are perversely dogged, especially when they get anonymous threats. With a pregnant wife back in the FRG, Stein has more to lose, but his intuition and initiative starts to grudgingly impress the guilt-wracked Bach. As they follow-up leads, they start to suspect the Kraft sisters were actually the victim of a serial killer.

Technically, Free Country is a remake of the Spanish film Marshland, but Alvart and co-screenwriter Siegfried Kamml cleverly adapt the post-Franco thriller to reunified Germany.  The mystery and procedural stuff of both films are perfectly respectable but they are still probably on the level of what you might find in many of the grittier European crime shows on MHz. Yet, what really sets Free Country apart is the reunification angle. Alvart takes us to a very particular time and place, when former East Germans were coming to terms with the crimes of the Communist regime. Bach is just at the right level to slide through to the new unified order, while still carrying baggage from his past.

The grungy setting is also quite distinctive. Invariably, the investigation draws Stein and Bach to rusty, abandoned industrial behemoths that probably never made sense economically and were maybe only built in the first place to supply a boastful line in a long-forgotten Erich Honecker speech.

Trystan Putter and Felix Kramer are rock solid as the tightly-wound Stein and the hard-drinking Bach. Their partnership rapport is more believable than what you see in most buddy-cop movies, because they never really become buddies. Marc Limpach also adds a lot to the mix with his intriguing portrayal of the journalist who has the dirt on Bach. Yet, perhaps the most poignant work comes from Nora von Waldstatten as Katharina Kraft, the murdered girls’ mother, even though her subplot gets a bit messy and is left conspicuously hanging.

Acting as his own cinematographer, Alvart indulges in a number of aerial shots, but it is hard to blame him, because they look great and give us an eyeful of how deeply scarred the previous socialist regime left this country. Throughout the film, he shows us how the sins of the past continue to pollute the people and the land. Very highly recommended, Free Country screens as an on-demand selection (geo-locked for Canada) of this year’s Fantasia.
Posted by J.B. at 3:00 AM