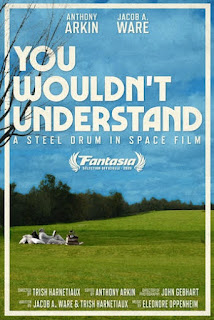 It is like the science fiction take on the old Grey Poupon commercials. How so, you might ask? Well, its complicated. It turns out there is a lot of space-time-continuum stuff involved in Trish Harnetiaux’s short film, You Wouldn’t Understand, which screened as part of the 2020 Fantasia International Film Festival.

Some short films are tricky to review because they entirely hinge around an ironic O. Henry revelation. Others are difficult to write about extensively, simply due to their brevity. Both factors apply to Harnetiaux’s film, co-written with co-star and co-producer Jacob A. Ware. A man is enjoying a fabulously well-appointed picnic, when suddenly another fellow pops up from the surrounding field. Do you happen to have any “horsey sauce” he asks, presumably meaning horseradish. From there it gets strange.

Given what it teases, YWU might have been richer, if it explored its big secret deeper. As it is, it plays more like a Twilight Zone skit from late night comedy show. It is funny, but light-weight. It also looks super slick, like it could have been a Grey Poupon reboot. For festival programmers, You Wouldn’t Understand is recommended as an appetite-whetter to pair with their meta-science fiction selections, following its Fantasia premiere.
Posted by J.B. at 10:30 PM