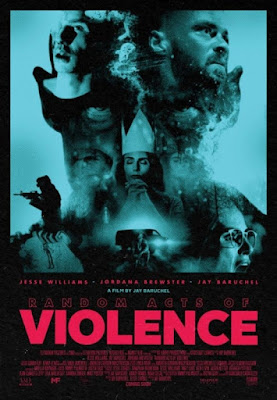 As a true crime writer, Todd Walkley is no Michelle McNamara or Ann Rule. His wife Kathy does not want to say it out loud, but she thinks he often lacks empathy for the victims he depicts in his Slasherman comic book. On the other hand, his indie publisher would say you can’t argue with success. Walkley is trying to find inspiration for a suitable ending, but he is about to get some unsolicited “help” from the real-life serial killer, whose crimes he chronicles in Jay Baruchel’s Random Acts of Violence, which premieres tomorrow on Shudder.

In hopes getting his mojo going again, Walkley and his friends embark on a driving tour from his Toronto home to pre-Covid ComicCon, through the very stretch of upstate New York where he grew up and the I-90 Killer stalked his victims. Everyone assumed the serial killer had “retired,” but when he sees the back issues they leave behind and hears his awkward radio interviews, the mystery murderer returns to his old ways. Soon, the killer is recreating the grisly murder scenes from Walkley’s comics and leaving him cryptic numeric voicemails.

Random starts out as a clever, uber-meta send-up of horror fandom and serial killer chic, but it runs out of originality at the midway point. Consequently, the only thing that distinguishes the standard issue second half is its sadistic brutality. Baruchel, who wrote both Goon movies and helmed sequel, clearly understands fan subcultures, but he totally loses his footing as a director. Granted, any adaptation of Justin Gray & Jimmy Palmiotti’s graphic novel must have violence, as per the title, but in this case, the laughs suddenly stop—completely—which is problematic. The confusing flashbacks do not help either—and there sure are a lot of them.

TV actor Jesse Williams is convincingly self-centered, yet un-self-aware as Walkley, while Jordana Brewster (from the Fast & Furious franchise) seems way too smart to put up with him. Baruchel gets a number of laughs in the first half as Ezra, the obnoxious publisher, but he is obviously recycling his foul-mouthed super-fan persona from Goon. Poor Niamh Wilson does not get to do hardly anything as Walkley’s assistant, the fourth person in the car, who just sits around waiting to be the first victim.

This could have been a razor-sharp satire of misplaced serial killer fandom and the purveyors of grisly gore, but instead it craters into tiresome bloodletting. It could and should have been much better than this. Not recommended, despite a strong start, Random Acts of Violence starts streaming tomorrow (8/20) on Shudder.
Posted by J.B. at 3:00 AM